A Trip to Freeland 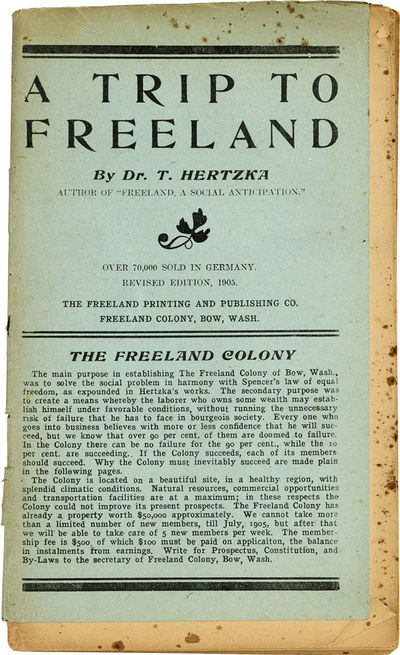 by [UTOPIAS - FREELAND] HERTZKA, Dr. T. [Theodore]
Bow, WA: The Freeland Printing and Publishing Co, 1905. First American Edition. First printing. Staple-bound pamphlet, 21cm x 12.5cm. Printed blue paper wrappers; 66pp. Covers and margins foxed, text age-darkened and lightly soiled; wrappers ill-fitting (as usual); a Good, complete copy. Though called the "Revised" edition, this is in fact the first American printing of Eine Reise Nach Freiland, the sequel to Hertzka's 1890 utopia , Freiland, Ein Sociales Zukunftsbild (translated as Freeland: A Social Anticipation: NY: 1891). an English edition first appeared in London in 1894 as A Visit to Freeland; the current work is an abridgement and revision of that text. Published as a prospectus of sorts for the Freeland Colony at Bow, Whidbey Island, Washington - the first of several (and the only to survive infancy) American communities founded upon the principles outlined in Hertzka's Freeland. The text as here presented eliminates all references to the African continent (where Freeland and its sequel were originally set), perhaps to allay nativist sentiment; the wrappers give a description of the Colony, its mission and inspiration, and invite readers to subscribe to the Colony's quarterly newsletter, Freeland, as well as to help fund the Brotherhood of the Co-operative Commonwealth, the Colony's holding company. Uncommon; not generally seen in commerce; OCLC notes about fifteen locations in North America. LEWIS p.87. Not in Sargent or Negley; not in Miller, American Communes 1860-1890. (Inventory #: 39906)
$300.00 add to cart or Buy Direct from
Lorne Bair Rare Books
Share this item

Pictures From An Institution

New York : Alfred A. Knopf , 1954
(click for more details about Pictures From An Institution)

London : Hodder and Stoughton Ltd , [1927]
(click for more details about The Magic Casket)
View all from this seller>