Debs and the Poets [Presentation Copy, Inscribed to A. Mitchell Palmer] 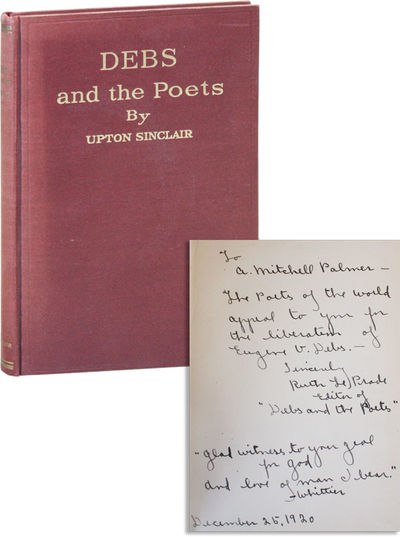 by [RADICAL & PROLETARIAN LITERATURE] LE PRADE, Ruth (editor); SINCLAIR, Upton (introduction)
Pasadena: Upton Sinclair, 1920. First Edition. Octavo (18.75cm); maroon cloth, with titles stamped in gilt on spine and front cover; [ii],99,[11]pp. With a full-page contemporary inscription from Le Prade to U.S. Attorney General A. Michell Palmer on the front endpaper: "To A. Mitchell Palmer - The poets of the world appeal to you for the liberation of Eugene V. Debs. - Sincerely / Ruth Le Prade / Editor of "Debs and the Poets" / "Glad witness to your zeal for God and love of man I bear." - Whittier / December 25, 1920." Gentle sunning to spine, hint of dustiness to upper edge of textblock, else Near Fine and clean throughout. Poems honoring socialist leader Eugene Debs by a variety of radical 20th century poets including Witter Bynner, Max Eastman, Charlotte Perkins Gilman, Carl Sandburg, Siegfried Sassoon, Horace Traubel, and Israel Zangwill, many others. Sinclair contributed the foreword, along with letters from H.G. Wells and George Bernard Shaw (who states: "Clearly the White House is the only safe place for an honest man like Debs"). A key association copy inscribed to Palmer, who served as Attorney General under Woodrow Wilson from 1919-1921. As a reaction to domestic unrest, Palmer created the General Intelligence Unit in 1919, recruiting J. Edgar Hoover to lead the new organization. During the First Red Scare (1919-1920), the "Palmer Raids" were launched, which resulted in numerous suspected radicals to be rounded up and deported. During the final weeks of Wilson's time in office, Palmer requested a Presidential pardon for an aging Debs, whose health was deteriorating in prison; Wilson's response was "Never! (Inventory #: 40004)
$1,500.00 add to cart or Buy Direct from
Lorne Bair Rare Books
Share this item