PETRA, Or The EXCAVATED CITY, The Ancient Capital of the Land of Idumia, and JERUSALEM 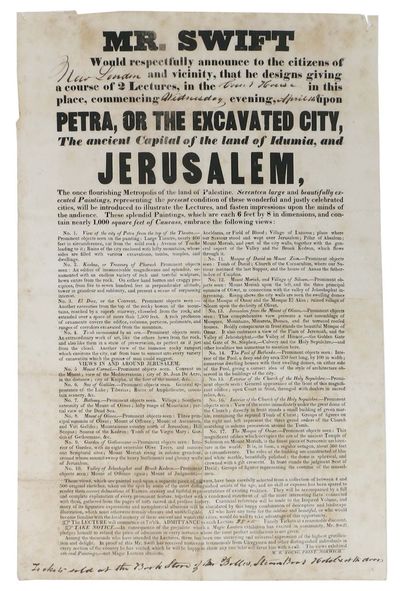 by [Advertising Broadside]. Swift, Mr. - Lecturer [presumed the Rev. Eli Smith, of Boston]
Norwich: M. B. Young, Print, 1841. 1st printing. Now housed in an archival mylar sleeve. Age-toning. Tack holes at the corners. Faint fold lines. Very Good.. Broadside, 13 lines of introductory text at top, over 2 columns of text describing the paintings to be exhibited. A job printing announcement, with the city, lecture location therein, day of week, and date all in manuscript at top. Price of the lecture [25 cts] in mss in the 7th line from the bottom. In the lower margin has been inked, "Tickets sold at the Book Store of Mr Bolles, Steam Boat Hotel & at the doors". 18" x 12"

"Petra is a historical and archaeological city in southern Jordan. Petra declined rapidly under Roman rule, in large part from the revision of sea-based trade routes. In 363 an earthquake destroyed many buildings, and crippled the vital water management system. In the 12th century, the Crusaders built fortresses but left after a while. As a result, Petra was forgotten for the Western world until the 19th century. The first European to describe them [the ruins] was Swiss traveller Johann Ludwig Burckhardt during his travels in 1812. The Scottish painter David Roberts visited Petra in 1839 and returned to England with sketches ..." [Wiki]In this advertisement, "Mr Swift" announces "a course of 2 lectures, in the [New London] Court House, in this place, commencing Wednesday evening, April 14th upon PETRA, or The Excavated City". He exclaims that the lecture will be accompanied by "Seventeen large and beautifully executed paintings, representing the present condition of these wonderful and justly celebrated cities.." The broadside then goes on to describe, in detail, the subject of each of the 17 paintings. He concludes by asserting "The views exhibited are real Paintings, --- not Magic Lantern illusions." No doubt this Mr Smith was riding the coattails of Roberts' sketches... one wonders where, today, might be found those paintings. And if no longer extant, here we document their onetime existence.As an aside, it should be noted that Eli Smith had a bit of a brouhaha with one J. S. Buckingham, who also published some text on Petra, of which Smith felt there were inaccuracies, and so published same. The contretemps resulting in Buckingham publishing an 1840 pamphlet documenting the correspondence between the two: PUBLIC ADDRESS, DELIVERED BY MR. BUCKINGHAM, In DEFENSE Of His LECTURES On PALESTINE AGAINST The CRITICISMS Of The REV. ELI SMITH, PUBLISHED, ANONYMOUSLY, In The NEW YORK OBSERVER, In 1839.No copies of this broadside found on OCLC.Rare. (Inventory #: 46846)
$1,500.00 add to cart or Buy Direct from Tavistock Books
Share this item

The LADY'S TOKEN: or Gift of Friendship.; Edited by Cotsworth Pinckney

Nashua, N. H. : Published by J. Buffum. Stereotyped by S. N. Dickinson, Boston , 1848
(click for more details about The LADY'S TOKEN: or Gift of Friendship.; Edited by Cotsworth Pinckney)
View all from this seller>