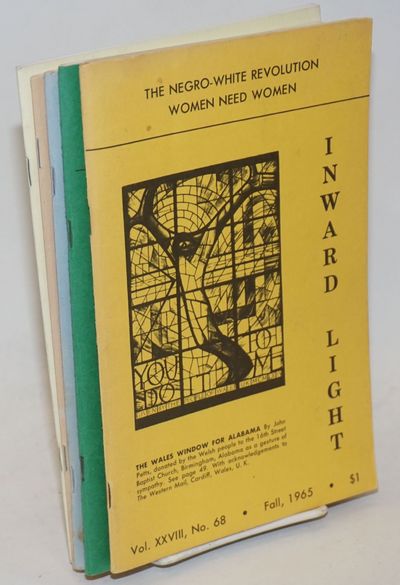 by Kotschnig, Elined Prys, editor; later Charles and Eleanor Perry
Washington DC; Bryn Mawr, PA: Inward Light, sponsored by the Friends Conference on Religion and Psychology, 1987. Five issues of the publication, staplebound booklet format, occasional marginalia or handling soil. Numbers present are 68, 81, 97, 99 and 103. Cover of no. 68 depicts a stained glass window donated by people from Wales to the 16th Street Baptist Church in Birmingham, where four girls were killed in a bombing. "Inward Light seeks to be an organ of expression and intercommunication among those concerned with cultivating the inner life and relating it to the problems of our time." Coverage ranges from civil rights to the new interest in the Goddess and memories of Jung. (Inventory #: 235060)
$35.00 add to cart or Buy Direct from Bolerium Books
Share this item