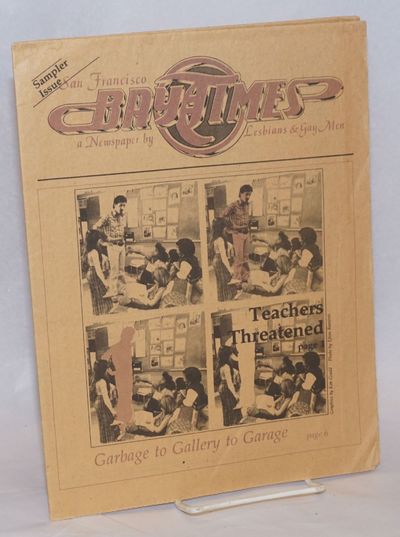 San Francisco: Bay Times, 1978. Newspaper. 12p., folded tabloid newspaper, news, articles, events, opinion, photos, heavily-toned newsprint. Cover stories on the threat to gay teachers and the 1977 Gay Freedom Day parade. The first periodical in the City to be published by and for both gay men and lesbians. Wikipedia and OCLC have incomplete and/or incorrect information. Those sites state that the paper started out as Coming Up! in October 1979 but it actually began as San Francisco Bay Times in 1978 (this issue) edited and published by Roland Schembari and Bill Hartman. In Schembari's obit it is stated that the paper folded after the first three issues and they reworked the idea over the next year. The new paper succeeded and remained titled Coming Up! until 1988 when it reverted to the original title. (Inventory #: 234972)
$25.00 add to cart or Buy Direct from Bolerium Books
Share this item