The Third International After Lenin. 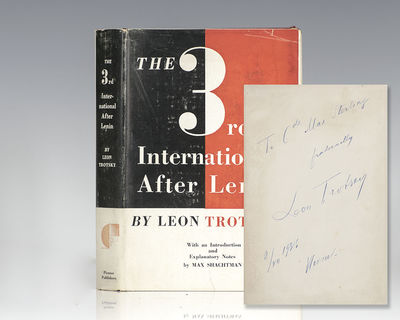 by Trotsky, Leon
New York: Pioneer Publishers, 1936. First edition of this collection of writings and speeches by Trotsky. Octavo, original cloth. Presentation copy, inscribed by the author on the front free endpaper in the year of publication, "To Comrade Max Sterling fraternally Leon Trotsky 8/7 1936 Weksel (Norway)." After being exiled from the Soviet Union, Trotsky lived in a number of places, Norway among them. The Norwegian Labor Party, which rose to power in 1935, had had previous affiliations with the Communist International and the Second International, prompting Trotsky to seek and obtain a visa from Oslo. Bookplate to the front pastedown, very good in a very good dust jacket. Translated by John G. Wright. With an introduction and explanatory notes by Max Shachtman. Uncommon signed and inscribed. Written in 1928, this is Trotsky's alternative to Stalin's course toward gutting the revolutionary program of the Communist International. "An international communist program is in no case the sum total of national programs or an amalgam of their common features," Trotsky wrote. "In the present epoch, to a much larger extent than in the past, the national orientation of the proletariat must and can flow only from a world orientation and not vice versa." Suppressed by Stalin in the Soviet Union, its publication elsewhere in the world helped gather the forces that continued the fight to build a revolutionary international movement of the working class. (Inventory #: 97388)
$4,800.00 add to cart or Buy Direct from
Raptis Rare Books
Share this item

Outdoor Pastimes of an American Hunter.

London : Collins , 1962
(click for more details about The Phantom Tollbooth.)
View all from this seller>