Political Debates between Hon. Abraham Lincoln and Hon. Stephen A. Douglas in the Celebrated Campaign of 1858 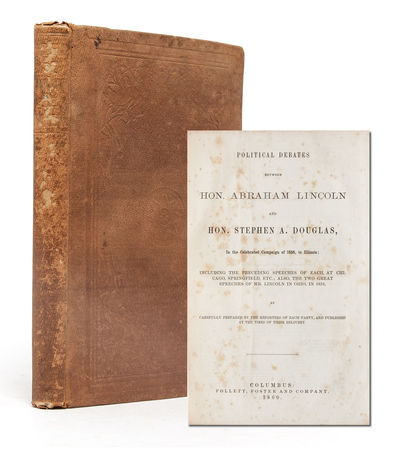 by Lincoln, Abraham and Stephen A. Douglas
Columbus: Follett, Foster and Company, 1860. First edition. Original publisher's cloth binding with some rubbing to spine and extremities. First issue, with all points as called for by Monaghan (no line over the publisher's slug on title verso, and the number 2 at the foot of page 17). Collates [viii], 268 pages: lacking front endpaper else complete. Some light scattered foxing as is common in American imprints of this era, but in all a tight, pleasing copy of this book documenting an important moment in American politics.

Documenting Lincoln and Douglas' rivalry for the 1858 U.S. Senate race, this title captures an important moment of flux for American politics. Just beginning his political career, the young Lincoln earned the Republican nomination right as the party was forming; and he already had proven himself "a leading figure because of his adroit and earnest dealing with the problem of slavery" (Oxford Companion). One of his great strenghts was his eloquence -- something Lincoln put on full display in these debates against Douglas, including the utterance of one of his most memorable lines, that "A house divided against itself cannot stand." Though Lincoln lost the Senate in 1858, he had managed to develop a national reputation and in 1860, the year of this book's release, would win the Presidency.