The Jews and International Relations: The Pursuit of Peace. 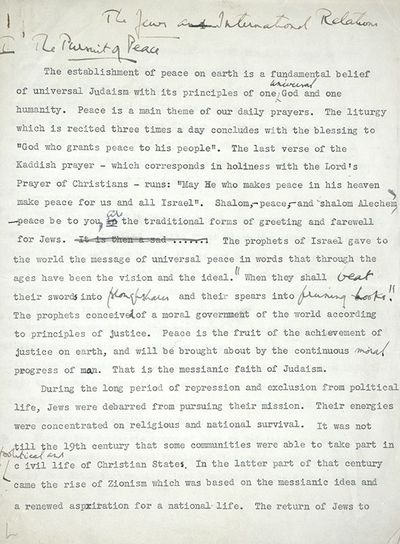 by Bentwich, Norman
c. 1950. Rare manuscript written by Mandatory Palestine's first attorney general, British Zionist Norman Bentwich. 21 pages, type-written with copious corrections and revisions in Bentwich's hand throughout, signed by Bentwich at the conclusion of the last page. Developed during his term as Chairman of the United Restitution Organization, the manuscript contains content and notes which would later be published as Bentwich's 1959 book: The Religious Foundations of Internationalism; A Study in International Relations Through the Ages. Also included at the conclusion of the text is a list of suggested reading. In very good condition. A rare and desirable signed manuscript.       English Barrister Norman Bentwich served as the first attorney general of Palestine from 1918 to 1931 and oversaw the transition of Palestine from an Ottoman territory to a British mandate in 1922. Bentwich played a major role in the development of Palestinian law but came into conflict with the British government for his perceived Zionist bias which had made him unpopular with Palestinian Arabs. After an attempt on his life by a 17-year-old Arab employee of the Palestine Police, in which he was shot in the thigh, Bentwich returned to England and was relieved of his position. In 1932, he became the Chair of International Relations at the Hebrew University of Jerusalem where he delivered many of his most notable speeches including "Jerusalem, City of Peace" and "Religion and Nations." (Inventory #: 81253)
$2,800.00 add to cart or Buy Direct from
Raptis Rare Books
Share this item