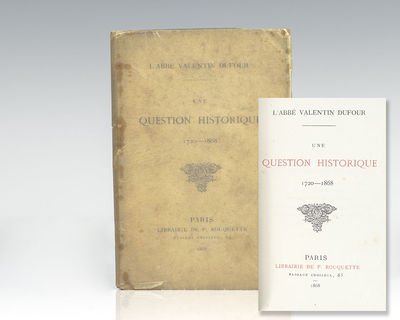 by Dufour, L'Abbe Valentin
Paris: Librarie de F. Bouquette, 1868. First edition of L'Abbe Valentin Dufour's historic dissertation on the consumption of horseflesh. Duodecimo, original wrappers as issued, engraved initials. In near fine condition, in the rare original glassine. Although horse is commonly eaten in many countries in Europe and Asia, it is not generally available, and is considered taboo, in English Speaking countries as well as Brazil, Israel, and among the Romani people and Jewish people. In France, horse can be found in common butcher shops and was famously consumed in large amounts during the 1870 Siege of Paris, when it was included in haute cuisine menus. L'Abbe Valentin Dufour's historic dissertation explores both arguments against and in defense of the consumption of horse meat. (Inventory #: 96211)
$300.00 add to cart or Buy Direct from
Raptis Rare Books
Share this item