Ismailia: A Narrative of the Expedition to Central Africa for the Suppression of the Slave Trade. Organized by Ismail Khedive of Egypt. 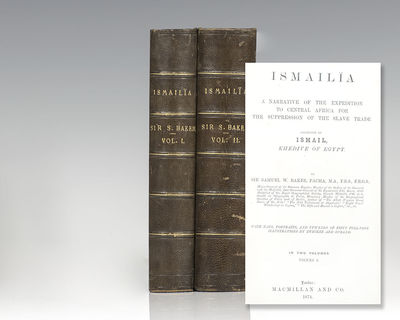 by Baker, Samuel White
London: Macmillan and Co, 1847. First edition of Baker's classic work documenting his journeys to the Nile. Octavo, two volumes. Bound in three quarters morocco over marbled boards with gilt titles to the spine, six compartments within raised gilt bands, marbled endpapers, all edges marbled. Engraved frontispiece portraits with tissue guards to each volume, with fifty full-page illustrations by Zwecker and Durand, folding map of Baker's routes. In very good condition. From the library of George Lucien Edwards with his bookplate to the pastedown of each volume. English explorer, naturalist and abolitionist Sir Samuel White Baker is best known for his discovery of Lake Albert, as an explorer of the Nile and interior of central Africa, and for his exploits as a big game hunter in Asia, Africa, Europe and North America. Baker served as the Governor-General of the Equatorial Nile Basin (today's South Sudan and Northern Uganda) between April 1869 and August 1873 and was a friend of King Edward VII, who as Prince of Wales, visited Baker with Queen Alexandra in Egypt. (Inventory #: 96200)
$1,250.00 add to cart or Buy Direct from
Raptis Rare Books
Share this item