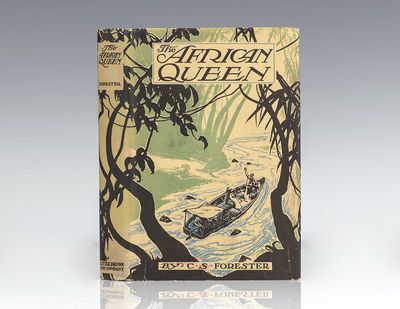 by Forester, C.S
Boston: Little, Brown, and Company, 1935. First edition of C.S. Forester's beloved African adventure, basis for John Huston's 1951 Oscar-winning film starring Humphrey Bogart and Katharine Hepburn. Octavo, original cloth. Near fine in a near fine dust jacket with a touch of rubbing. An exceptional example. The cornerstone item in any serious Forester collection" (Smiley, 39) and the basis for the classic, 1951 John Huston film starring Humphrey Bogart and Katharine Hepburn. Bogart won the Best Actor Academy Award for his performance. It was selected for preservation in the United States National Film Registry in 1994, with the Library of Congress deeming it "culturally, historically or aesthetically significant". (Inventory #: 68572)
$2,500.00 add to cart or Buy Direct from
Raptis Rare Books
Share this item