A Compleat Collection of Haydn, Mozart and Beethoven’s Symphonies, in Score, Most Respectfully Dedicated, by Permission, to H.R.H The Prince of Wales. 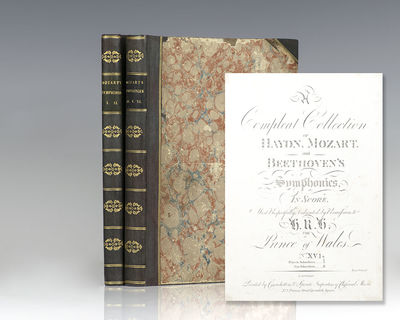 by Beethoven, Ludwig van; Joseph Haydn and Wolfgang Amadeus Mozart
London: Lavenu, Cianchettini & Sperati, 1808-1810. First editions of the first printings of the full orchestral scores of the complete symphonies of Beethoven, Mozart, and Hadyn. Quarto, two volumes bound in three quarters morocco over marbled boards wit gilt titles and tooling to the spine, including A Complete Collection of Haydn, Mozart and Beethoven's Symphonies (Cianchettini and Sperati) and A Complete Collection of Mozart and Beethoven's Symphonies. A Compleat Collection of Haydn, Mozart and Beethoven's Symphonies contains the first appearance of the full scores of Mozart's Overture to the Marriage of Figaro, Mozart's Symphony no. 40, and no. 41. (Fuld, The Book of World-Famous Music, 564-567). A Complete Collection of Mozart and Beethoven's Symphonies (Lavenu) contains the first appearance of the full scores of Mozart's Symphony no. 39, no, 13, and no. 38. In very good condition with light toning to the text. An exceptional collection of the utmost rarity. 1786 saw the successful premiere of Mozart's The Marriage of Figaro in Vienna. Its reception in Prague later in the year was even warmer, and this led to a second collaboration with Da Ponte: the opera Don Giovanni, which premiered in October 1787 to acclaim in Prague, but less success in Vienna in 1788. The two are among Mozart's most important works and are mainstays of the operatic repertoire today. In 1787, the young Ludwig van Beethoven spent several weeks in Vienna, hoping to study with Mozart. No reliable records survive to indicate whether the two composers ever met. Beethoven would go on to become a crucial figure in the transition between the Classical and Romantic eras in classical music, he remains one of the most recognized and influential of all composers with his best-known compositions including 9 symphonies; 5 piano concertos; 1 violin concerto; 32 piano sonatas; 16 string quartets; a mass, the Missa solemnis; and an opera, Fidelio. (Inventory #: 95829)
$40000.00 add to cart or Buy Direct from
Raptis Rare Books
Share this item