The Long Road of Woman’s Memory. 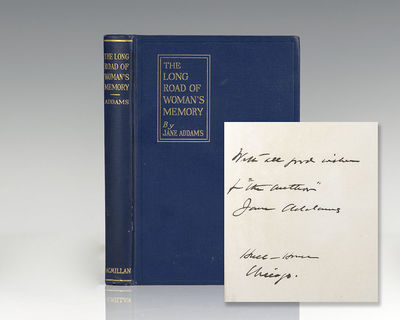 by Addams, Jane
New York: The Macmillan Company, 1917. First edition, second printing of Addams' work exploring the influence of memory on women's experience of life at Hull House. Octavo, original cloth with gilt titles to the spine and front panel. Signed by the author on the front free endpaper, "With all good wishes from the author Jane Addams Hull-House Chicago." In near fine condition. Rare and desirable. "The mother of social work", Jane Addams co-founded one of America's most famous settlement houses, Hull House, in 1889 which would eventually become the residence of 25 women. The Hull House became a center for research, empirical analysis, study, and debate, as well as a pragmatic center for living in, and establishing good relations with, the neighborhood. Residents of Hull-house conducted investigations on housing, midwifery, fatigue, tuberculosis, typhoid, garbage collection, and truancy. Eventually, Hull House became a 13-building settlement complex, which included a playground and a summer camp (known as Bowen Country Club). (Inventory #: 96140)
$2,500.00 add to cart or Buy Direct from
Raptis Rare Books
Share this item

An Account of the Kingdom of Caubul, and its Dependencies in Persia, Tartary, and India; Comprising a View of the Afghaun Nation; A History of the Dooraunee Monarchy.

New Delhi : Munshiram Manoharlal Publishers Pvt. Ltd. , 1998
(click for more details about An Account of the Kingdom of Caubul, and its Dependencies in Persia, Tartary, and India; Comprising a View of the Afghaun Nation; A History of the Dooraunee Monarchy.)

“Bones and I;” or, The Skeleton at Home.

London : Chapman and Hall , 1869
(click for more details about “Bones and I;” or, The Skeleton at Home.)
View all from this seller>