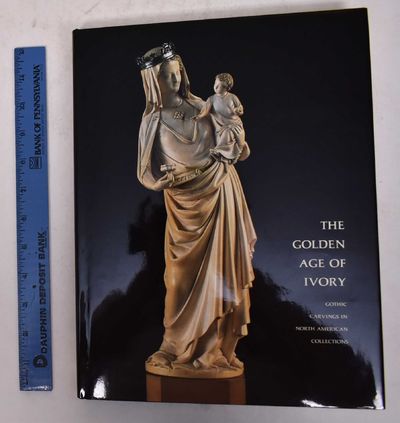 by Randall, Richard H.
New York: Hudson Hills Press, 1993. Hardcover. New. Black cloth boards with gilt stamped lettering. Glossy black and color-illustrated dust jacket with cream lettering. 160 pp. 298 BW and 20 color illustrations. This long-awaited companion volume to Richard H. Randall, Jr.'s acclaimed Masterpieces of Ivory at the Walters Art Gallery (Hudson Hills Press, 1985) catalogues and reproduces, often in multiple views, every known work in American and Canadian private collections and sixty-one museums (excepting only the separately published Walters and Metropolitan Museum of Art). The Gothic ivories spread liberally throughout American museums, varying widely in their quality and in. Their places of origin, cover the entire history of the subject. Here (reproduced alongside related objects from European collections) are 245 religious and secular works: major independent sculptures, domestic altar-pieces, marriage caskets, combs, mirror backs, chessmen, and much more. They represent the pinnacle of the carver's art from thirteenth - through fifteenth-century France, Italy, Germany, Holland, Denmark, Flanders, and England, presenting a comprehensive. View of the daily lives of the men and women of a variety of social classes as well as the complex artistic interrelationships of the late medieval world. This important book, which includes essays on "The Collecting of Gothic Ivories in America" and "Attributing Gothic Ivories," sets new standards of connoisseurship and scholarship. It is the result of a fourteen-year study, undertaken by Randall and his colleagues in charge of ivory collections at the world's leading. Museums, to reassess every object in the major collections of Europe and America in terms of design source (especially sculptural models), find site, iconography, trade patterns, archives, provenance, and inscriptions. As Randall demonstrates, there was not a single country in Europe that was not creating ivory sculpture, nor a royal treasure or cathedral sacristy without its supply of fashionable ivory products. (Inventory #: 170417)
$29.99 add to cart or Buy Direct from Mullen Books
Share this item