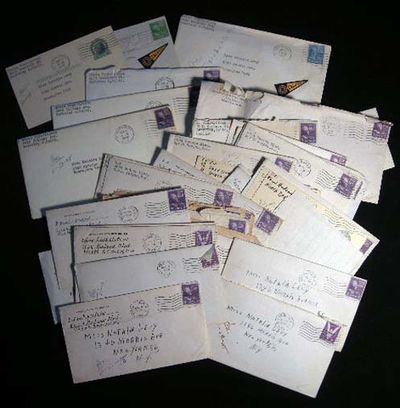 by (Americana - 20th Century - Jewish History - Camping - Camp Achvah - Education - UC Berkeley)
New York, NY: Not Published, 1945. A group of 40 letters and cards; correspondence between a young man and a woman friend who he met and worked with at the Jewish summer Camp Achvah; he later became a student at UC Berkeley. He had also attended the Jewish Camp Cejwin. Mostly, the letters are from Edwin Finkelstein to his friend Natalie Levy back in New York with a couple of notes to him from her. The Achvah material is mostly camp gossip and scuttlebutt regarding the owners of the camp, who according to the writer took advantage of the counsellors and workers: "...Concerning your job. You will have the same job and privileges as a regular counsellor. That is you will have the same hours, curfews, time off, and days off. In regard to a bonus, don't make me laugh, last year only one person got a bonus...a whole $ 5. The only reason he got it was because his father did legal work form Mr. Barshad....Don't get involved in any counsellor uprisings...be good to your kids and you will get good tipslast year a good percentage of the girls were willing to go out on strike with the boys..." Edwin F. works at Steve Cohen Boys' Camp in Hopewell Junction NY 1946 and writes of his work and play there during that summer; he continues to ask about and advise about Camp Achvah, where Natalie is a summer counsellor. He notes that "...Achvah is a dump compared with this placehere were are treated like humans, not like dirt..." Nevertheless, there is a great feeling of camaraderie among those who attend and work at the camps, many reunions and get-togethers over the years. The last group of 6 letters are from UC Berkeley and the difficulties of coursework and enjoyments of attending that school and living in California. (NOTE): "...In the 1920s and 1930s a recognition began to arise that the summer camp might play a significant role in Jewish education and the socialization of the Jewish child into Judaism. Samson Benderly, the first director of New York's Bureau of Jewish Education, was the first to recognize the unique opportunity that the summer camp offered for teaching modern Hebrew and other traditional Jewish values, through immersing children in a Hebrew and Judaic environment. In 1927 he opened Camp Achvah, the first Hebrew-speaking camp in Arverne, on New York City's Rockaway peninsula. In 1932, he sought to expand the program and purchased a campsite in a rural setting in upstate Godeffroy, New York. The expanded program retained the intensive Judaic program but was not Hebrew speaking, as had been the program at the Arverne site..." ref. Encyclopaedia Judaica 2007 "Jewish Camping" article. Other social and political events are remarked upon in the letter content, for instance the high school student strikes and riots in the boroughs of NYC in 1945 which required police intervention and mention of a similar, race related riot in Bergen College New Jersey regarding a disqualified (black) football player. Most letters with their mailers & cancellations intact; some age-wear and soiling; contents clean and in very good condition. . Manuscript. Not Bound. Very Good. (Inventory #: 26074)
$125.00 add to cart or Buy Direct from Certain Books
Share this item
Certain Books
Offered by