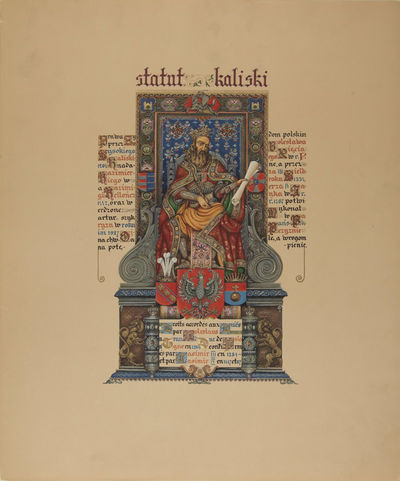 by Szyk, Arthur
Paris: F. Bruchman for Editions de la Table Ronde, 1932. Limited edition. 1/500?. Copy 156 of 500 (in the final plan). The full 500 copies were never printed. A large part of the printed run was destroyed in the German bombing of Warsaw (see website of the Kosciusko Foundation). Szyk himself stated that only fifty copies existed and some sources place the number as low as thirty. An informal census revealed to this writer at least fifteen library holdings. A search of the holdings of Jewish Museums and Art Museums would likely reveal additional copies. However, the number of surviving copies is certainly less than one hundred. Folio, 48 loose leaves, (47 leaves plus 1 blank complete) 15.1" by 12.6":including among others the "Page of Certification," with the author's signature, the "Finis Libri" page, the inumeration page and an initial blank. There is substantial dispute as to the correct ordering of the plates which were issued loose. Many copies lack the initial blank present with this set. Two of the plates were not initially planned and may be missing in some copies [One was the Yiddish translation of the Statutes. Ansell p. 57]. The copy held by the Central Judaika Database is lacking the plates with the Spanish text. Joseph Ansell in his work "Arthur Szyk: Artist, Jew, Pole," includes his own description of the contents and he includes a quote from a review of the folio from 1933 which are helpful. Ansell writes, "[full paragraph at the center of the page of Ansell p. 56.]" This copy is organized in this way with the blank at the start. P.G. Konody in his 1933 review "Artist's Great Work Worthy of Medieval Examples," Daily Mail, 30 May 1933,7, mentions "45 magnificently ornamented pages," which offers a contemporary concurrence of how the material was seen at the time of publication. [Ansell, p. 78]. The "unbound pages were contained in a red portfolio emblazoned with the Polish eagle printed in gold and silver." Ansell, p. 60. This edition is housed in a new a red linen clam-shell box with leather labels. Arthur Szyk's "Statute of Kalisz," is his first major manuscript project. His earlier illuminated work was under the influence of oriental examples. "The Statutes of Kalisz," is in the tradition of Northern European illumination. Jean Fouquet in particular is cited as a source. Fouquet's work as an illustrator of manuscripts is more of a model for Szyk's portraiture style than as an overall guide. Szyk's page design is much more sophisticated and modern than Fouquet. The degree to which each page is saturated and laden with illustrated commentary is far advanced and often more explicit than the model. The most important, personal and rarest work by Arthur Szyk celebrates the text of The General Charter of Jewish Liberties, which granted civil and religious rights to Polish Jews when issued in 1264 by Duke Bolesław the Pious in Kalisz. Elaborate lettering in nine languages, initials illuminated or historiated, geometric and floral borders plus detailed miniature paintings of historical and mythic events. Influenced by French, Italian and Flemish manuscript styles. Metallics embellish the original's gauche and watercolor, while with wit, figures include Szyk's family and two self-portraits. Begun during the May 1926 Polish coup and supported with research from Józef Piłsudski's Polska Partia Socjalistyczna government, Arthur Szyk's masterwork subtly contrasts past mistreatment and post-WWI fascism with the ideals of justice and freedom. (Inventory #: 44855)
$37,500.00 add to cart or Buy Direct from
Eric Chaim Kline Bookseller
Share this item

Berlin-Charlottenburg : Verlag "Schwellen , 1923
(click for more details about Shtetl, Mayn Khoyever Heym; A Gedenknish" (My little town, my destroyed home; in memory))
View all from this seller>