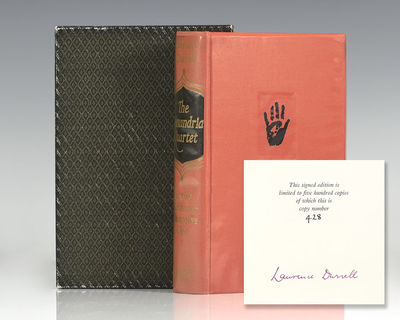 by Durrell, Lawrence
London: Faber & Faber, 1962. Signed limited first edition of Durrell's masterpiece, one of 500 numbered copies. Signed by Lawrence Durrell on the limitation page. Octavo, original orange cloth, hand-print design to upper board in black, yellow endpapers, top edge gilt. With the original acetate dust jacket, in the publisher's black and gold slipcase. Bookplate to the front pastedown of book collector Otis Skinner Blodget. An exceptional example. Lawrence Durrell's masterpiece The Alexandria Quartet are four novels set in Alexandria, Egypt during the 1940s. The first of his four novels Justine "demands comparison with the best books of our century." Balthazar continues Durrell’s epic series with "a spontaneous, resourceful new beauty" and, in the third novel Mountolive, Durrell again creates a "work of splendid craft and troubling veracity." The tetralogy’s final novel Clea completes Durrell’s stated design of modeling "the series on ‘the relativity proposition’ in physics"—altogether achieving "a spontaneous, resourceful new beauty" (New York Times). Named by Modern Library as one of the 100 greatest novels of the twentieth century. (Inventory #: 97421)
$1,250.00 add to cart or Buy Direct from
Raptis Rare Books
Share this item