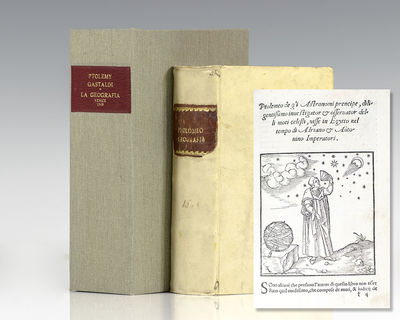 by Ptolemy, Claudius
Venice: G. B. Pedrezano, 1547. First complete edition in Italian of Ptolemy's "first atlas of the new world" (Nordenskiold) and the most detailed and comprehensive world atlas published prior to Ortelius's Theatrum in 1570. Small octavo, bound in full vellum with gilt morocco spine label, all edges speckled red, woodcut border to the title page, woodcut initials and illustrations throughout the text including a portrait of an astronomer and 60 double-page engraved maps designed by Giacomo Gastaldi. The majority of the 34 maps of the modern world are entirely new first appearances, including 7 maps of the Americas. Among the maps of the Americas is the Nueva Hispania tabula nova which shows the Mississippi and Florida area and is the first separate printed map of the region. Also included is the landmark Tierra Nueva map of the North American coast from Florida to Labrador. In fine condition. Housed in a custom cloth clamshell box. An exceptional example of this landmark work. Ptolemy's Geographia, or Geography, first appeared in Greek in Alexandria circa 150 C.E. as a new revision of the now non-extant atlas of Marinus of Tyre using additional Roman and Persian geographical dictionaries and principles. The Geography's translation into Arabic in the 9th century and Latin in 1406 was highly influential on the geographical knowledge and cartographic traditions of the medieval Caliphate and Renaissance Europe. No Greek manuscript of the Geography survives from earlier than the 13th century and the first Latin translations were completed circa 1406 by by Jacobus Angelus in Florence, Italy, under the name Geographia Claudii Ptolemaei. Published in 1547, the present small-format edition became the most comprehensive world atlas ever published prior to the publication of Ortelius's Theatrum in 1570. (Inventory #: 95367)
$35,000.00 add to cart or Buy Direct from
Raptis Rare Books
Share this item