The Condition of the Working Class in England in 1844. With Appendix Written 1886, and Preface 1887. Translated by Florence Kelley Wischnewetzky. 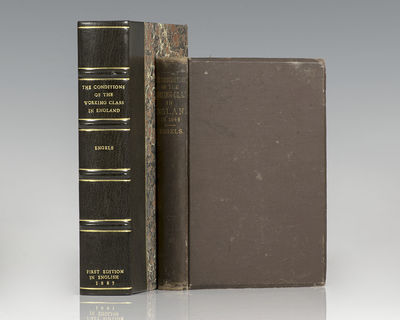 by Engels, Frederick. [Friedrich]
New York: John W. Lovell Company, 1887. Scarce first edition in English of Engels's classic account of the universal condition of the industrial working class, the forerunner to Karl Marx's Das Capital. Octavo, original cloth with gilt titles to the spine, beveling to the front and rear panel, top edge gilt. In very good condition, name to the title page. Translated by Florence Kelley Wischnewetzky. Uncommon with only one having appeared at auction in the last 80 years. "Born in Barmen, the eldest son of a textile manufacturer in Westphalia, Engels (1820 - 1895) was trained for a merchant's profession. In 1842, Engels left for England to work in his father's Manchester firm. Already converted by Moses Hess to a belief in 'communism' and the imminence of an English social revolution, he used his two-year stay to study the conditions which would bring it about. From this visit, came two works which were to make an important contribution to the formation of Marxian socialism: 'Outlines of a Critique of Political Economy' (generally called the 'Umrisse') published in 1844 and The Condition of the Working Class in England, published in Leipzig in 1845." (Jones, 159). The daughter of a Philadelphia judge, Florence Kelley Wischnewetzky "exerted an immediate and dramatic influence on the generation of women reformers clustered within the social settlement movement during the Progressive Era. Her understanding of the material basis of class conflict and her familiarity with American political institutions, combined with her spirited personality, placed her in the vanguard of a generation of reformers who sought to make American government more responsive to what they saw as the needs of working people" (ANB). (Inventory #: 96249)
$18,000.00 add to cart or Buy Direct from
Raptis Rare Books
Share this item