The Origins and Development of Radiotelephony" IN Proceedings of the Institute of Radio Engineers, Vol 25, Number 9, September 1937 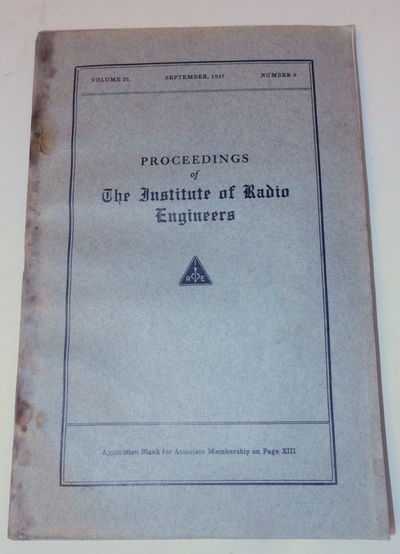 by Espenschied, Lloyd ; Bown, Ralph ; Norton, K A. and others
Menasha, Wisconsin: The Institute of Radio Engineers, Inc, 1937. First Edition. Wraps. Good. First Edition. VI, 1097-1240, VII-XXIV pages. Entire issue offered. 8vo. Original tan printed wrappers, stapled. Staining to original wrappers near spine panel front and back. Page edges soiled. Nice illustration in advertisement for General Radio on rear. Wraps. Rare in the original wrappers. Contains articles by Espenshied, Bown, Norton, and others relevant to early radio and it's development. Articles include "The Origins and Development of Radiotelephony" by Espenshied (Sterlin and Shiers 9-103: "A unified account devoted primarily to American contributions from 1912 on. Photos, bibliography."), "Transoceanic Radiotelephone Development" by Ralph Bown, and "The Propagation of Radio Waves over the Surface of the Earth and in the Upper Atmosphere" by K. A. Norton.

Ralph Bown was well known for his introduction of the transistor at the first press conference at Bell Labs. His article discusses how far transoceanic radio use has come: "Ten years have elapsed since the opening to public use on January 7, 1927, of the first long distance radio telephone circuit. This form of intercontinental communication has now come into practical business and social use. A network of radio circuits interconnects nearly all the land wire telephone systems of the world. The art has passed through the pioneering stage and is well into a period of growth." The Norton article has over 185 citations as of this writing and covers "Completely general formulas are given for computing at any point above a plane earth of finite conductivity the vector electric field for a source which may be a combination of vertical and horizontal electric dipoles or a loop antenna with its axis parallel or perpendicular to the earth."

The Collected Jorkens Volume One [ The Travel Tales of Mr. Joseph Jorkens and Jorkens Remembers Africa ]

San Francisco and Portland : Night Shade Books , 2004
(click for more details about The Collected Jorkens Volume One [ The Travel Tales of Mr. Joseph Jorkens and Jorkens Remembers Africa ])
View all from this seller>