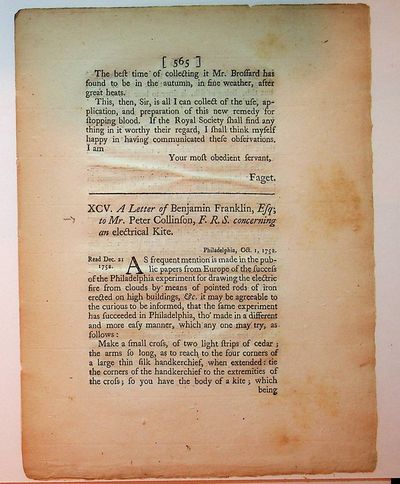 by Franklin, Benjamin ; [ Collinson, Peter ]
[ London ]: [ C. Davis, Printer to the Royal Society ], 1753. First Edition. Extract. Very Good. First Edition. 565-568 pages. 4to. 19 x 24 cm. (7 1/4 x 9 1/4 inches). An extract from "Philosophical Transactions Giving some Account of the Present Undertakings, Studies, and Labours, of the Ingenious in Many Considerable Parts of the World ... Vol. XLVII For the Years 1751 and 1752...London: Printed for C. Davis, MDCCLIII" The article offered here, "A Letter of Benjamin Franklin, Esq; to Mr. Peter Collinson, F. R. S. concerning an electrical Kite" is found on pages 565-567 and is complete. Browned at the edges, leaves separated. Extract. "Until the middle of the eighteenth century electricity was known only in its static form, [often experimentally collected in Leiden jars]...The most dramatic result of [Benjamin Franklin]'s researches was the proof that lightening is really an electrical phenomenon. Others had made such a suggestion before him - even Newton himself - but it was [Franklin] who provided the experimental proof. In 1752 he flew a kite in a thunderstorm and attached a key to its string. From this he collected electrical charges in a Leiden [leyden] jar and showed that atmospheric and frictional or machine-made electricity are the same. He went on to propose the fixing of iron rods at the top of buildings, masts of ships, etc., from which he conducted the electric charges they collected from lightening into the wet subsoil - the invention of the lightening conductor." (PMM/2nd edition #199, p119 referring to E. Cave's separate publication of some of Franklin's electrical experiments).

In the paper offered here, Benjamin Franklin writes to Collinson on Oct 1, 1752, explaining that while many are having success all over Europe duplicating the Philadelphia experiment capturing lightening through pointed iron on buildings, there is a far more elegant way to proceed. He then describes his famous electric kite experiment explaining how the average person can conduct the experiment (along with a few cautions about where to stand, etc). Most importantly, after collecting lightning from the kite he states: "thereby the sameness of the electric matter [ static electricity gathered in leiden jars ] with that of lightning [ is ] completely demonstrated."

His letter to Collinson was read to the Royal Society in London December 21, 1752 and published in their transactions [ as offered here ] in 1753.

A key piece in the history of electrical science and the history of ideas. (Inventory #: 23846)
$4,125.00 add to cart or Buy Direct from Kuenzig Books
Share this item

1960
(click for more details about [ Original artwork, computer ] "Say, I'd like for our computer to meet your computer!)

[ no publication place ] : [ no publisher noted ] , 1870
(click for more details about [ Photograph, cabinet card ] Cabinet card of poet and editor William Cullen Bryant with facsimile signature beneath)
View all from this seller>