The House Servant's Directory, or A Monitor for Private Families: Comprising Hints on the Arrangement and Performance of Servants' Work, With General Rules for Setting Out Tables and Sideboards in First Order; The Art of Waiting in All Its Branches; and Likewise How to Conduct Large and Small Parties with Order; With General Directions for Placing on Table All Kind of Joints, Fish, Fowl, &c. with Full Instructions for Cleaning Plate, Brass, Steel, Glass, Mahogany; And Likewise All Kind of Patent and Common Lamps: Observations on Servants' Behavior to Their Employers; And Upwards of 100 Various and Useful Receipts, Chiefly Compiled for the Use of House Servants; And Identically Made to Suit the Manners and Customs of Families in the United States 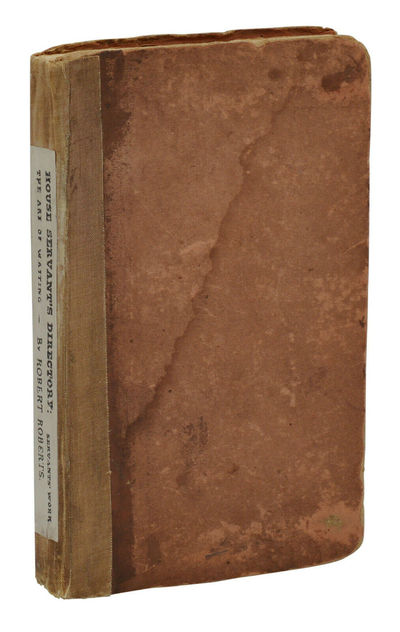 by Roberts, Robert
Boston & New York: Munroe and Francis; Charles S. Francis, 1827. First Edition. Very Good. First edition. xiv, [15]-180 pp. Slightly later linen backing over contemporary, perhaps original brown paper-covered pasteboard, paper spine label. Likely original endpapers. All edges rough-trimmed. Very Good condition overall for a working copy of a cookbook from this era. Contains penciled tick marks and dog-ears that suggest it was used by a member of a household staff who denoted useful passages such as instructions for "Waiting on Dinner," a recipe "To Recover a Person from Intoxication," and a way "To Know Whether a Bed is Damp or Not, When Traveling." Dampstain to boards that extends to endpapers, rear flyleaf, and final two pages of text; associated foxing. Boards rubbed with offsetting along backstrip; well-worn edges and rounded, exposed tips; back board slightly creased. Spine slightly cocked. Internal hinge repairs evident. General toning but remarkably little foxing and thumbsoiling throughout. Second gathering loosening; pages 23-30, 47-54, 59-66, 119-126 (two pairs of conjunct leaves each) detached and laid in; small marginal hole at page 57-8, not affecting text; two other short marginal tears. From the collection of Marcus Crahan with his bookplate on front paste down; ticket of Corner Book Shop beneath that. A true historical milestone: the first commercially published book in the United States written by an African American. It is also the first cookbook by an African American, although it serves more as a guide to household management than a cookbook per se, as the author was a head butler, not a chef. The 105 recipes herein encompass cookery as well as remedies and cleaning products. The book was a commercial success, going through three editions, and was widely used throughout New England upper-class homes. Later in life Roberts became a prominent Boston-area abolitionist, contributing to William Lloyd Garrison's paper The Liberator. [Tipton-Martin The Jemima Code pp. 14-16]. (Inventory #: 140938048)
$22,000.00 add to cart or Buy Direct from
Burnside Rare Books
Share this item
Burnside Rare Books
Offered by

The Virginian: A Horseman of the Plains

New York : The Macmillan Company , 1902
(click for more details about The Virginian: A Horseman of the Plains)

[no publisher] , 1917
(click for more details about [Lynd Ward's handmade eighth grade composition book illustrated with some of his earliest drawings]. Written Thoughts)
View all from this seller>