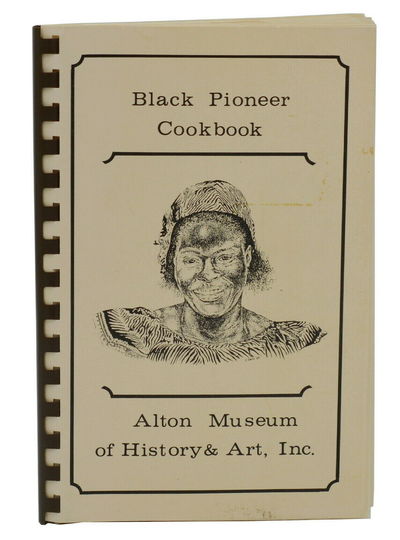 by The Committee on Black Pioneers
Alton, Illinois: Alton Museum of History & Art, 1989. Near Fine. 115 pp. Publisher's original comb-bound printed stiff wraps, with additional 14-page insert laid in. Near Fine, with light shelf wear, light soiling to wraps. Compiled by The Committee on Black Pioneers, whose mission was to document and preserve the art and history of River Bend African Americans. As per the introduction, at one of the Committee's monthly meetings, it was suggested that they stage a "tasting party" in conjunction with the Alton Little Theatre's upcoming 1990 production of A Raisin on the Sun. Laid in is a stapled 14-page pamphlet entitled "Black Pioneer Cookbook Insert," with recipes from that event. Insert is Near Fine, with light shelf wear and soiling to wraps. The River Bend area of Illinois encompasses three counties in the western central, and southern area of the state, taking its name from a section of the Mississippi River which here bends, flowing west to east, instead of north to south. Additionally, it's where the Mississippi meets with the Missouri and Illinois Rivers. This gift-shop keepsake from The Alton Museum of History & Art documents local historic African American landmarks and important people who hailed from the area, such as Miles Davis, and tells the story of pioneering African Americans who settled the area. OCLC locates three institutional holdings. (Inventory #: 140938053)
$450.00 add to cart Available from
Burnside Rare Books
Share this item
Burnside Rare Books
Offered by

The Law of Success

Cleveland, OH : Ralston Publishing Co , 1957
(click for more details about The Law of Success)
View all from this seller>