The Copernican Revolution. Planetary Astronomy in the Development of Western Thought. 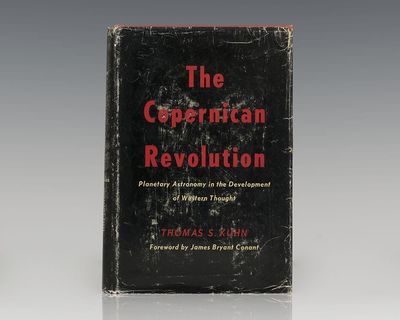 by Kuhn, Thomas S
Cambridge, MA: Harvard University Press, 1957. First edition of Kuhn's classic treatise. Octavo, original cloth. Near fine in the rare original dust jacket with some rubbing. Foreword by James Bryant Conant. The Copernican Revolution is a work by the philosopher Thomas Kuhn, in which the author provides an analysis of the Copernican Revolution, documenting the pre-Ptolemaic understanding through the Ptolemaic system and its variants until the eventual acceptance of the Keplerian system. Kuhn argues that the Ptolemaic system provided broader appeal than a simple astronomical system but also became intertwined in broader philosophical and theological beliefs. Kuhn argues that this broader appeal made it more difficult for other systems to be proposed. (Inventory #: 77852)
$750.00 add to cart or Buy Direct from
Raptis Rare Books
Share this item

The Works of William Makepeace Thackeray. [Including The History of Henry Esmond, Vanity Fair, Pendennis, The Newcomes, and The Virginians].

London : Smith, Elder and Co. , 1900-1902
(click for more details about The Works of William Makepeace Thackeray. [Including The History of Henry Esmond, Vanity Fair, Pendennis, The Newcomes, and The Virginians].)
View all from this seller>