The Structure of Scientific Revolutions. 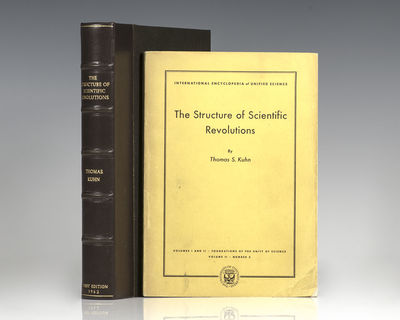 by Kuhn, Thomas S
Chicago: University of Chicago Press, 1962. First edition of this groundbreaking work. Octavo, original wrappers as issued. In near fine condition with light rubbing to the extremities. Housed in a custom half morocco clamshell box. First editions are scarce. With the publication of The Structure of Scientific Revolutions, Kuhn challenged long-standing linear notions of scientific progress, arguing that transformative ideas don't arise from the day-to-day, gradual process of experimentation and data accumulation but that the revolutions in science, those breakthrough moments that disrupt accepted thinking and offer unanticipated ideas, occur outside of "normal science," as he called it. Though Kuhn was writing when physics ruled the sciences, his ideas on how scientific revolutions bring order to the anomalies that amass over time in research experiments are still instructive in our biotech age. "One of the most influential books of the 20th century. . . . Singlehandedly changed the way we think about mankind's most organized attempt to understand the world" (The Guardian). Named by Modern Library as one of the 100 greatest non-fiction books of the twentieth century. (Inventory #: 12027)
$4,500.00 add to cart or Buy Direct from
Raptis Rare Books
Share this item

London : The Crime Club by Collins , 1939
(click for more details about Hercule Poirot’s Christmas.)
View all from this seller>