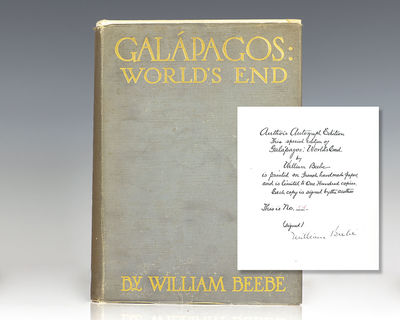 by Beebe, William
New York: G. P. Putnam's Sons, 1924. Signed limited first edition, one of 100 numbered copies, this is number 54, boldly signed by William Beebe, the father of modern ecology. Quarto, original cloth, illustrated endpapers. Illustrated with 24 tipped-in color plates by Isabel Cooper, and 83 photographs mostly by John Tee-Van. Near fine in a near fine dust jacket. William Beebe was eager to undertake an expedition to the Galapagos Islands, with the intention of obtaining more detailed data in support of evolution than Charles Darwin had been able to collect in his earlier visit. In 1923, Harrison Williams agreed to finance such an expedition, and Beebe was provided with a 250-foot (76 m) steam yacht called the Noma for this purpose along with a support crew. The support crew included a number of scientists who had worked with Beebe previously and several artists including the marine painter Harry Hoffman, as well as some of Williams' friends whose inclusion was a condition for Williams' agreement to fund the expedition. Passing through the Sargasso Sea on the way to the Galapagos, Beebe was fascinated by the diversity of life that could be found in the sargassum weed floating on the surface, and spent several days scooping the weed from the water to examine the creatures that lived in it. Sargassum in the Sargasso Sea Beebe's first expedition to the Galapagos lasted twenty days, broken into two ten-day periods, between which the Noma was forced to return to Panama for fresh water and coal. During this expedition he documented the unique ways that animals that inhabit the Galapagos have evolved in response to the absence of predators. The Galapagos animals generally showed no fear of humans, causing the team to have a high degree of success at capturing live specimens for the zoo. Beebe also discovered a previously unknown bay on Tower Island in the Galapagos, which he named Darwin Bay, and documented the diversity of animal life that inhabited it. During the return to New York from this expedition, Beebe continued to dredge animals from the sea, using a pair of new devices he had devised to assist himself with this: a "pulpit", an iron cage affixed to the bow of the ship that enabled its occupant to examine the surface of the sea more closely; and a "boom walk", a 30-foot (9.1 m) boom jutting from the side of the ship from which he suspended himself. The book in which Beebe summarized this expedition, titled Galapagos: World's End, was an instant best-seller and remained on the New York Times top ten list for several months. (Inventory #: 84953)
$3,000.00 add to cart or Buy Direct from
Raptis Rare Books
Share this item