Farmington Town Clerks and Their Times 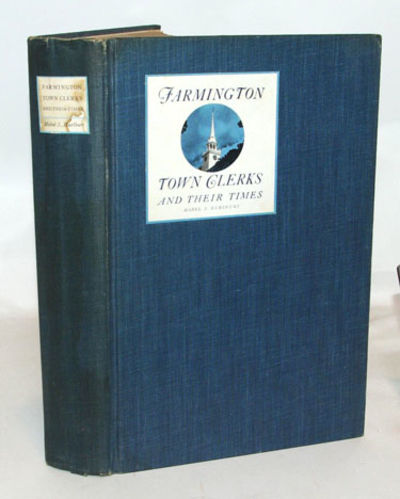 by Hurlburt, Mabel S.
Farmington, Conn.: Self published, 1943. Limited first edition. Very good+ in dark blue cloth covered boards with two paper paste-downs on the front board and on the spine, deckled fore edges to the text block and with very slight foxing to the end papers. The paper label on the spine shows a bit staining and the first and last free end pages show light staining. A small quarto of 9 3/16 by 6 1/4 inches with a dampness stain to the top edge of the text block which did not penetrate to the pages themselves except for the end sheets as noted above. Without a dust jacket which may not have been issued. Identified as copy number 277 of only four hundred copies printed and signed and dated in Farmington on January 25, 1944 by the author on the first free end page. 404 pages including an index, 22 pages of biographical sketches of the original settlers of Farmington, other addendum and 347 pages of text describing the history of the towns of Farmington and Unionville, Connecticut. Illustrated with a photographic reproduction of the 1650 agreement with the Tunxis Indians for the distribution of land, a map showing the homes of the original settlers from 1643 to approximately 1700 (followed by a key list of original settlers) together with 27 other photographs and maps. Several pages are devoted to the famous Farmington Canal which traversed the town from north to south the location of which is shown in one of the included maps. A definitive source for genealogists and historians. (Inventory #: TB30628)
$125.00 add to cart Available from
Town's End Books
Share this item