During Greeley’s 1872 Presidential Campaign Against Grant, He Writes “I Never Asked Any One To Forward My Nomination For President…We Shall Succeed” 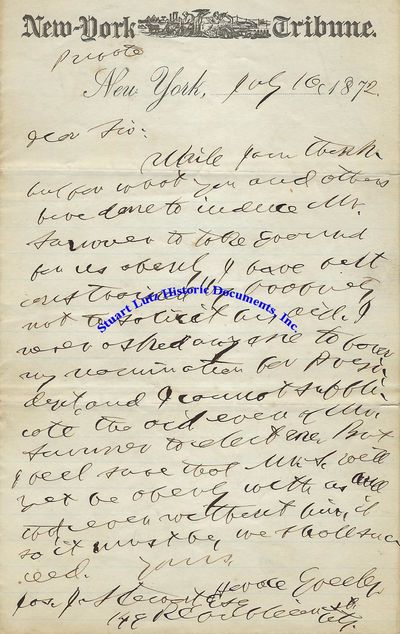 signed
by HORACE GREELEY
HORACE GREELEY (1811-1872). Greeley was a prominent newspaper editor and a Presidential candidate in 1872. He is best remembered for the quote “Go West, young man”, and signed Jefferson Davis’s bail bond in May 1867. ALS. 1pg. 5” x 8”. July 16, 1872. New York. An autograph letter signed “Horace Greeley” on “New-York Tribune” letterhead. He wrote in the midst of his 1872 Presidential campaign against Ulysses Grant: “Dear Sir, While I am thankful for what you and others have done to induce Mr. [Charles] Sumner to take…for us obversely I have felt constrained by…not to solicit his aid. I never asked any one to forward my nomination for President, and I cannot supplicate the aid even of Mr. Sumner to elect me. But I feel sure that Mr. S. will yet be openly with us as that even without him, it so it must be, we shall succeed. Yours, Horace Greeley”. Charles Sumner, the Massachusetts Senator, broke with President Grant and supported Horace Greeley during the 1872 election. Greeley lost badly to Grant and died weeks after the election. The letter is in fine condition and Greeley’s indecipherable scrawl is legendary. (Inventory #: 4597)
$800.00 add to cart Available from
Stuart Lutz, Historic Documents, Inc.
Share this item