The Siege of Corinth. A Poem. Parisina. A Poem 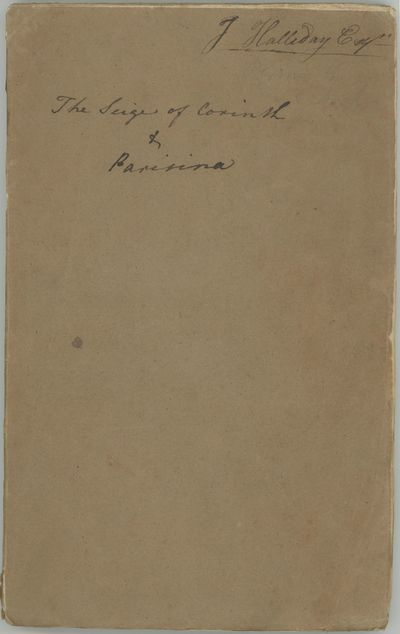 by BYRON, GEORGE GORDON, LORD
London: Printed by John Davison for John Murray, 1816, 1816. First edition. Randolph, page 55; Tinker 551; NCBEL III, 281. Wrappers a little worn at the head and foot of the spine, but overall a fine copy in original state, enclosed in a chemise and quarter morocco slipcase.. 8vo, original brown wrappers, [92] pages + 4 pages of publisher's terminal ads dated February 1816 and half-title. Two typically Byronic poems, the first a tale of conflict between Christians and Muslims, and the second based on the dramatic lives of Niccolo Ill d'Este, Marquis of Ferrara (1383-1441), and his wife Parisina, the latter who was executed for adultery by the former. Niccolo Ill d'Este also decreed that "all women within his domains found to be guilty of adultery were to be put to death. He had to rescind this order once it was determined that this action would depopulate Ferrara" - Wikipedia. Contemporary ownership signature on the upper wrapper of J. Halliday Esq., with the titles of the two poems written in ink also apparently in the same hand. (Inventory #: 27975)
$600.00 add to cart or Buy Direct from
Brick Row Book Shop
Share this item

(San Francisco: Printed by Edwin & Robert Grabhorn and James McDonald), 1923 , 1923
(click for more details about Poems and Seven Drawings)
View all from this seller>