A BRIEF HISTORY OF THE IMPOSITION OF HANDS ON BAPTISED PERSONS. [Caption title] 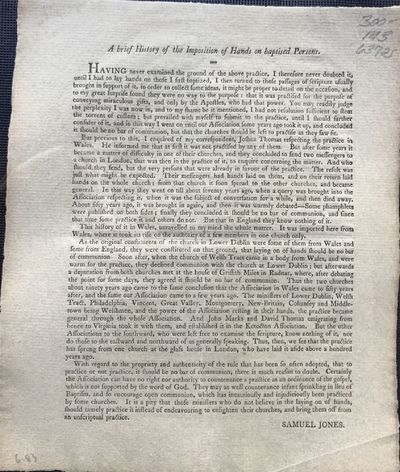 by Jones, Samuel (1737-1814)
[Philadelphia: np, 1805. Broadside. 22 x 18 cm., signed in type by Samuel Jones. Probably printed at Philadelphia. Though some copies listed on OCLC are dated as early as 1780, we presumed it was more likely 1805 because of the response, printed by Ustick in 1805, entitled "A true history of laying on of hands upon baptized believers as such..." written by David Jones in answer to Samuel Jones' handbill. Samuel Jones was pastor of the Baptist Church at Lower Dublin, Pa., and an active member of the Philadelphia Baptist Association. However, since publications of the association were sometimes printed at Burlington, N.J., by Stephen C. Ustick, it is possible that the handbill was printed there. According to Jones, "the Imposition of Hands" came to the Philadelphia area, including Lower Dublin, Welsh Tract, Vincent, Great Valley, Montgomery, etc., from Wales, where it is long out of use. He declares that it has no basis in scripture. The broadside is unlisted by Evans, Bristol, Shipton & Mooney, American Imprints or Sabin, but is well represented in institutions. According to the Encyclopedia Brunoniana [Brown University], Jones "was a prominent member of the Philadelphia Association instrumental in the founding of the College [Brown]...He was the pastor of the Baptist church at Pennepek in Pennsylvania for fifty-one years and conducted an academy for the education of young men. He was a friend of [Brown] President James Manning, and on Manning's death was asked to be president of the College, but declined because of his advanced age." Jones served as a chaplain of a Pennyslvania regiment during the Revolutionary War. (Inventory #: 63725)
$300.00 add to cart or Buy Direct from
Bartleby's Books
Share this item

THE KINGDOM OF THE PEARL

New York : Brentano's , 1925
(click for more details about THE KINGDOM OF THE PEARL)

EXPOSITION OF THE PRINCIPLES OF ABBOTT'S HYDRAULIC ENGINE, with tables and engravings, together with an illustration of the power of wheels, heretofore used

Boston, [MA] : S. Rowland Hart, Printer , 1835
(click for more details about EXPOSITION OF THE PRINCIPLES OF ABBOTT'S HYDRAULIC ENGINE, with tables and engravings, together with an illustration of the power of wheels, heretofore used)
View all from this seller>