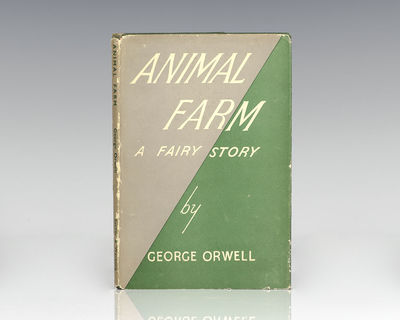 by Orwell, George
London: Secker & Warburg, 1946. First British edition of Orwell's timeless allegorical novel-- a scathing satire on a downtrodden society's blind march towards totalitarianism. Octavo, original green cloth. Near fine in a near fine dust jacket with light rubbing to the extremities. The dust jacket has the Early List for 1945 to the rear panel and the Search light motif in red to the reverse of the jacket. The jacket has a stated price of 6s. Housed in a custom clamshell box. An exceptional example of this classic Orwellian tale. "A political fable that partly recounts, in an allegorical mode, the aftermath of the Russian revolution, and partly illustrates a belief in the universal tendency of power to corrupt" (Stringer, 22)." Animal Farm is [Orwells] masterpiece" (Connolly 93). Time Magazine chose it as one of the 100 best English-language novels (1923 to 2005); it also featured at number 31 on the Modern Library List of Best 20th-Century Novels. It won a Retrospective Hugo Award in 1996, and is included in the Great Books of the Western World selection. (Inventory #: 97542)
$6,500.00 add to cart or Buy Direct from
Raptis Rare Books
Share this item