With Forks and Hope: An African Notebook. 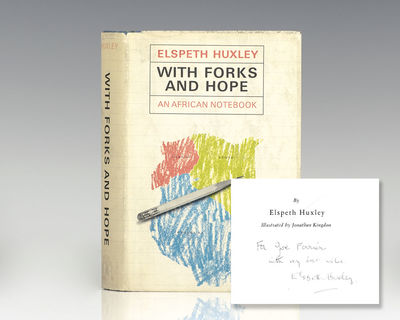 by Huxley, Elspeth
1964: William Morrow & Company, New York. First edition of Huxley's authoritative report on the rapidly changing political climate of post-colonial East Africa. Octavo, original half cloth, illustrated with maps and drawings by Jonathan Kingdon. Presentation copy, inscribed by the author on the title page, "For Joe Ferrier with my best wished Elspeth Huxley." Laid in is the original typed transmittal letter, an autograph card and photograph of Huxley; all three signed by her to Ferrier. The recipient, Joe Ferrier was a lifelong fan and pen pal of Huxley's. They often exchanged letters, books, and article clippings between England and the United States. Near fine in a near fine price-clipped dust jacket. Jacket design by Harsh-Finegold. Huxley states in the present volume: "Writing about modern Africa is like trying to sketch a galloping horse that is out of sight before you have sharpened your pencil. But it is just because so much is happening - because the scene sparkles with new hopes and plans, because nothing is static and nothing seems impossible...'for in truth,' as Winston Churchill wrote in 1907, 'the problems of East Africa are the problems of the world.'" (Inventory #: 96083)
$175.00 add to cart or Buy Direct from
Raptis Rare Books
Share this item