Curability of Tumors by Medicines. 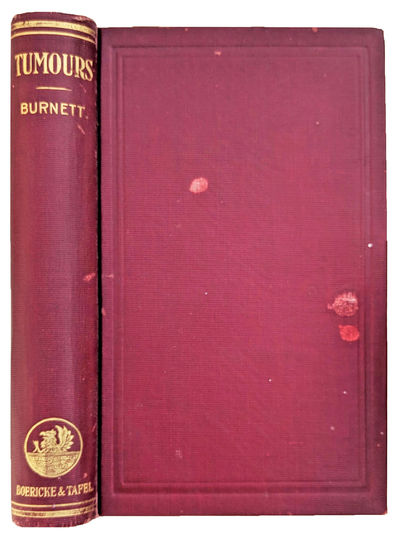 by BURNETT, James Compton (1840-1901).
Philadelphia:: Boericke & Tafel, 1901., 1901. Small 8vo. 345, [1] pp. Index. Red blind- and gilt-stamped cloth; mild wear. RARE. Very good. Second edition, revised. This book, reviewed contemporaneously: "If this book recounted one or two isolated cases of tumors disappearing at a time the patient happened to be taking medicine, we would discard it as unworthy of notice. On the contrary, numerous cases are reported in extenso in a way that fairly staggers those who, like the reviewer, hold pessimistic views concerning the curability of tumors by medicines. Certainly one cannot get around Dr. Burnett's statements by saying that he was favored by coincidences, for his cures are too many; nor can they charge him with diagnostic mistakes, for his writings show that he knows whereof he speaks. We take pleasure in commending the work to our readers. We must say, however, that we still favor surgical measures as the most certain, at least in the hands of the average man, - but inasmuch as there are numerous instances in which surgery is inadmissible, there will be abundant opportunity of attempting to follow in Dr. Burnett's footsteps." – The Hahnemannian Monthly, volume 36, p. 60. (Inventory #: MMRM1430)
$50.00 add to cart Available from
Jeff Weber Rare Books
Share this item

London: : John Reeves, 1802. , 1802
(click for more details about The Holy Bible, containing the Old Testament and the New: translated out of the original tongues, and with the former translations diligently compared and revised, By His Majesty's special Command. [Five volumes].)

[New York]: : Physical Review Letters, 1964. , 1964
(click for more details about [3 offprints, including:] Spin and Unitary-Spin Independence in a Paraquark Model of Baryons and Mesons.)
View all from this seller>