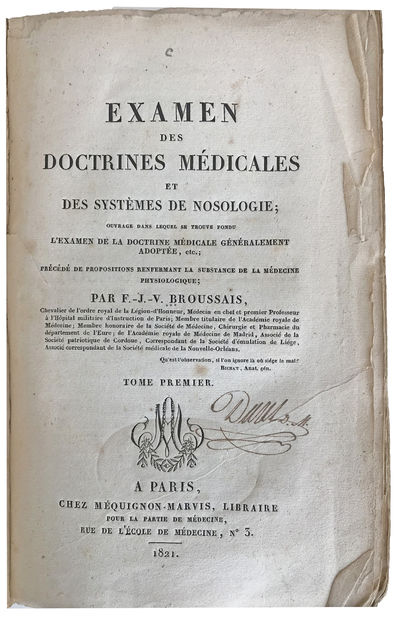 by BROUSSAIS, Francois Joseph Victor (1772-1838).
Paris:: Mequignon-Marvis, 1821., 1821. Two volumes. 8vo. [4], 332; [4], (331)-874 pp. Index. Modern book paper covers; spines with printed paper labels. Pages generally good with some foxing. Owner inked signature, and rubber stamp in both volumes, "T. Dunet D.M. A. Nuits". Early edition. Broussais was extremely popular during his time, known as "the emperor of medicine." This particular work was written in criticism of Pinel and Laennec. He considered himself in opposition of dogma and systems, creating his own elaborate system. The present work deals heavily with inflammation, for which Broussais offers therapies of diet and leeches. It was first written and issued in 1816 and the author continued to edit the work, eventually expanding it to 2,600 pages in 4 volumes. "Surgeon of the armies of France and professor of general pathology and therapeutics at Paris, Broussais was the most celebrated French practitioner of his day, and, according to Arturo Castiglioni, the "most sanguinary physician in history" - Castiglioni, A history of medicine. New York, 1946. p. 699. Although he taught the importance of clinical observation, Broussais' rigid attitudes regarding his often erroneous theories hindered more often than helped the progress of French medicine. Broussais believed that the basis of all pathology was gastroenteritis and that debilitating treatment was called for in nearly every disease. His most common remedy was the application of leeches to the stomach or the head. The popularity of his methods is evidenced by the fact that during one year, over 35,000,000 leeches were imported into France. Broussais was not popular among his Parisian medical colleagues and the preface to the present work is a vicious diatribe against those who refused to believe in his medical theories. The book was written only a year or two after he went from military service into private practice, and many of his arguments are based on observations he made while on the medical faculty at the military hospital at Val de Grace." – Heirs of Hippocrates 1265. Heirs of Hippocrates 1265; Waller 1496 (1821 ed.); Wellcome II, p. 248. See: Chazaud, Jacques, F.-J.-V. Broussais: De l'irritation a la folie : un tournant methodologique de la medecine au XIXe siecle. Toulouse, 1992. Valentin (M.) - Francois Broussais, 1772-1838: empereur de la medicine; jeunesses, correspondance, vie et œuvre. Dinard: Assoc. des Amis du Musee du Pays de Dinard, 1988. See also: Maulitz, Russell C., Book Review: Francois Broussais: Empereur de la medecine, Journal of the History of Medicine and Allied Sciences, v.46 n.1, (19910101): 114-115. (Inventory #: MMRM1388)
$100.00 add to cart Available from
Jeff Weber Rare Books
Share this item

The Drama of Life After Death: A Study of the Spiritualist Religion.

New York: : Henry Holt, 1932. , 1932
(click for more details about The Drama of Life After Death: A Study of the Spiritualist Religion.)
View all from this seller>