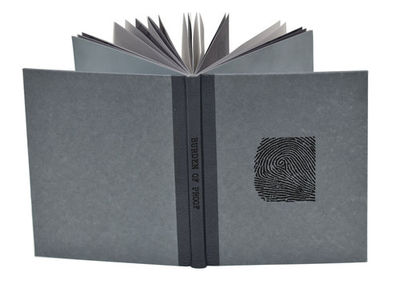 by Gibbs, Stephanie.
Los Angeles:: Stephanie Gibbs,, 2018.. Edition of 16. 6.5 x 8"; 58 pages. Five color screenprints on hand dyed Crane's Lettra. Digital printing on paper vellum. Bound in quarter leather with abaca covers. Design, screenprinting, dying, and binding by Stephanie Gibbs. Numbered. Initialed by the artist.  References: Chiromantie, Johannes Hartlieb (ca. 1485-95);. Finger Prints, Francis Galton (1892). The Universal Declaration of Human Rights, UN (1948). Forensic Science in Criminal Courts, President's Council (2016). Gibbs accompanies excerpts from the "The Universal Declaration of Human Rights" with texts regarding analysis for DNA, bitemark, fingerprint, footwear, hair, and firearms residue. Images of palm prints and fingerprints are interspersed throughout the text. Stephanie Gibbs: "Fate is written in many forms: in the line of a palm, in the swirls of a fingertip, in the helix of a chromosome.  "While forensic science is accepted by many as inarguable proof of guilt, numerous studies have called into question both the theory and the practice of forensics, as it is often used to reinforce previous assumptions rather than to question them. Many methods commonly accepted as indicators are instead reflections of what we wish to see. "Galton, the inventor of fingerprinting, has been called 'racist even by Victorian standards.' In many ways, fingerprinting is the new palmistry: fervently believed, in spite of any evidence to the contrary. (Inventory #: 22892)
$475.00 add to cart Available from Vamp & Tramp
Share this item