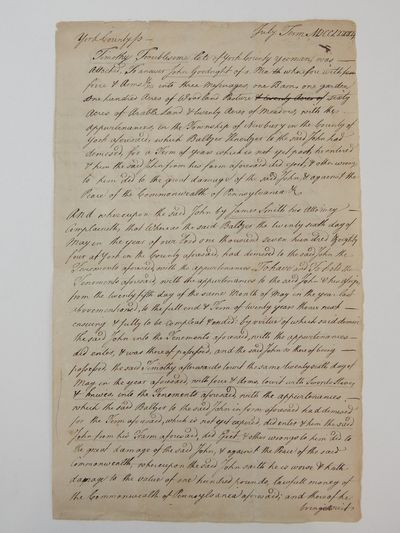 by SMITH, James (1719-1806)
York County, PA, 1784. unbound. very good. Exceptional ADS, a legal brief completely in Smith's hand, signed at the beginning "Smith", and later in the text "James Smith" [as they all are], folio, 2 pages, York County, Pennsylvania, May 20th 1784, just seven days after the ratification of the Treaty of Paris which officially ended the Revolutionary War. In this case, Smith is representing John Goodnight against Timothy Troublesome, "...Whereupon the said John [Goodnight] by James Smith his attorney, complaineth late of York County yeoman, was attached by the said Timothy Troublesome with force of arms, to wit with swords and knives, entered into his tenements aforesaid, did eject and other wrongs to him, did to the great damage of the said John, and against the Peace of said Commonwealth, whereupon the said John saith he is worse and hath damage to the value of one-hundred pounds, lawful money of the Commonwealth [due him]..." To clarify this case a bit: Timothy Troublesome entered John Goodnight's house on May 20 1784 and evicted hum from the premises, stating that he was the rightful owner of the house, farm and various lands. Smith then brought suit on behalf of Goodnight against Troublesome for compensation of 100 pounds. While awaiting judgement on this case, Smith surprised the court by extending the suit to influde another person identified as Major William Asheton, who was then currently in possession of the disputed house, farm and lands. Smith demands a declaration of judgement by the court... and if Major Asheton does not appear... be made a defendant... and suffer judgement therein... and be turned our of posession..." *Sadly the conclusion of this case could not be located in the Pennsylvania archives. Condition: This ADS is in remarkable condition in that it is evenly toned, virtually free of foxing, no splits a the folds and no tape repairs. Other than very light fraying at the top and bottom border this item is in excellent condition. British-born Founding Father and Signer of the Declaration of Independence representing Pennsylvania. He was originally a member of the Provincial Convention in Philadelphia and later, a Delegate to the Continental Congress. (Inventory #: 289704)
$2200.00 add to cart or Buy Direct from
Argosy Book Store
Share this item

by DAUMIER, Honore and PHILIPON, Charles

GUIDE MAP OF CALCUTTA AND HOWRAH

Calcutta : DIPT printing
(click for more details about GUIDE MAP OF CALCUTTA AND HOWRAH)
View all from this seller>