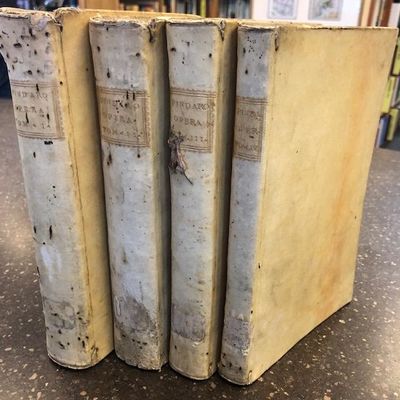 by Pindar; Gautier, Gianbatista [translator]
Roma [Rome]: Nella Stamperia del Komarek, 1762-1768. Hardcover. Octavos, 4 volumes; VG; bound in contemporary full vellum, gilt lettering to spines; some bookworm damage to spines, minimal impact to text block; large hole to middle of spine on volume 3; speckled text block; ex-library, with expected markings, including remnants of labels to tail of spines, blind stamps and ink stains to interior, pocket to rear pastedowns; With 45 numbered plates (restarting in each volume), plus frontispiece in volume 1; shelved case 3. The epinikion is a genre of occasional poetry also known in English as a victory ode. In ancient Greece, the epinikion most often took the form of a choral lyric, commissioned for and performed at the celebration of an athletic victory in the Panhellenic Games and sometimes in honor of a victory in war. The epinikion was performed not at the games, but at the celebration surrounding the champion's return to his hometown or perhaps at the anniversary of his victory. The odes celebrate runners, pentathletes, wrestlers, boxers, and charioteers; Pindar usually narrates or alludes elaborately to a myth connected to the victor's family or birthplace. Shelved Dupont Bookstore. (Inventory #: 9-12-1316190)
$480.00 add to cart or Buy Direct from
Second Story Books
Share this item

Andover : Flagg and Gould , 1820
(click for more details about A JOURNAL OF VOYAGES AND TRAVELS IN THE INTERIOUR OF NORTH AMERICA)

THE CITIES AND CEMETERIES OF ETRURIA. TWO VOLUMES

London : John Murray , 1848
(click for more details about THE CITIES AND CEMETERIES OF ETRURIA. TWO VOLUMES)
View all from this seller>