The Third Part of the Institutes [Bound with] The Fourth Part of the. 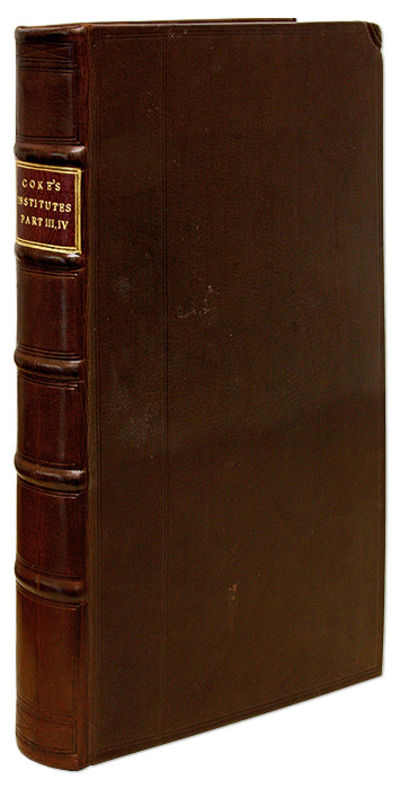 by Coke, Sir Edward
1680. Early Editions of Coke's Third and Fourth Institutes in a Handsome Binding Coke, Sir Edward [1552-1643]. The Third Part of the Institutes of the Laws of England: Concerning High Treason, And Other Pleas of the Crown, And Criminal Causes. London: Printed by W. Rawlins, For Thomas Basset, 1680. [vi], 243, [19] pp. [Bound with] Coke, Edward. The Fourth Part of the Institutes of the Laws of England: Concerning the Jurisdiction of Courts. London: Printed by W. Rawlins, 1681. [x], 364, [36] pp. Portrait frontispiece lacking. Folio (12-1/4" x 7-3/4"). Recent period-style calf, blind rules to boards, raised bands and lettering piece to spine, endpapers renewed. A few minor nicks and scuffs to boards, upper corners bumped. Moderate toning to interior, somewhat heavier in laces, occasional faint dampstaining to upper margins, minor worming to lower margins of the first six leaves of Third Part below text, some offsetting and minor edgewear to first three leaves of Third Part and final four leaves of Fourth Part. $1,250. * Sixth editions. "Coke's Third Institutes gives us a Treatise of great learning, and not unworthy the hand that produced it;... Having run over all criminal matters, and their legal punishments, he concludes with the nature of pardons and restitutions; showing how far, in each of these, our Kings can process alone, and where they want the assistance and joint power of the Parliaments" (Marvin). The Fourth Part outlines the authority and jurisdictions of the Court of Star-Chamber, Kings Court, Chancery, the Court of Common Pleas, Ecclesiastical Courts, Courts of Exchequer, Augmentations, Admiralty, the Justices Assize, Courts in Universities of Cambridge and Oxford, Court of the Commissioners Upon the Statute of Bankrupts, the Marshalsea, the Stannaries, the Eighteen Courts of the City of London, the Court of Pipowders (concerning Markets and Fairs), the Courts of the Forest Countries, various ecclesiastical courts and many more. Marvin, Legal Bibliography 208. English Short-Title Catalogue R18334, R24769. (Inventory #: 69658)
$1250.00 add to cart or Buy Direct from
Lawbook Exchange
Share this item