Miscegenation: The Theory of the Blending of the Races, Applied to the American White Man and Negro 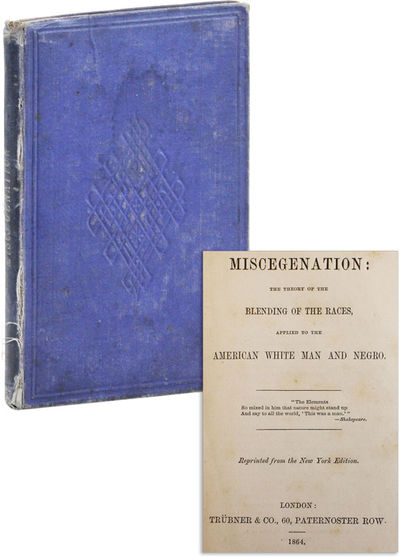 by [RACIST LITERATURE] [CROLY, David Goodman, George Wakeman, and E.D. Howell]
London: Trübner & Co, 1864. First U.K. Edition. Hardcover. Anonymously-written pamphlet, originally published in New York (1864), co-authored by three members of the New York World staff as part of an anti-Lincoln Copperhead campaign in advance of the 1864 presidential election. "The principal author was Croly, an Irish-born journalist who coined the term 'miscegenation' and used it here first...the seventy-two page work casued quite a stir among abolitionists, southerners, and politicians. It was a subject so fraught with explosive feelings on both sides, that society tried to ignore what many members casually accepted in private. The true meaning of the term became the subject of debate in Congress, churches, barbershops, and sewing circles throughout the nation" (BLOCKSON 37). Besides introducing a new word into the English language, a significant work for its attempt to control the narrative around racial equality. WORK, p.578. Slim 12mo. (17.5cm); blue cloth, with titles stamped in gilt on spine, blind-ruled border and decorative emblem stamped on covers; vi,[7]-91,[5]pp. Contemporary owners inked name to front pastedown (Moore, 1865), hinges cracked but holding, with front endpaper loose but attached; cloth rubbed, with scattered soil, and starting splits along joints; Good, complete copy. (Inventory #: 43967)
$400.00 add to cart or Buy Direct from
Lorne Bair Rare Books
Share this item

Akron : Press of the Capron & Curtice Co , 1893
(click for more details about Historical Address delivered by Rev. Henry Stauffer at the First Stauffer Reunion which was held near Middlebranch, Stark County, Ohio, September 3, 1898)

New York : William S. Gottsberger , 1886
(click for more details about What I Believe)
View all from this seller>