Ben-Hur. A Tale of the Christ 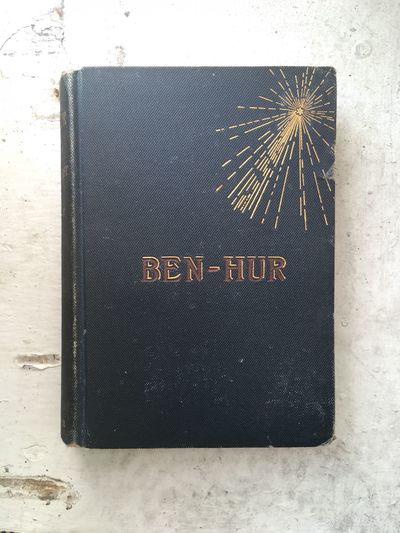 by Wallace, Lew
New York: Harper & Brothers, 1880. Hardcover. Very Good. Hardcover. First edition, later state with later binding and 4 line dedication page. Ben-Hur by Lew Wallace published by Harper and Brothers on November 12, 1880, and considered "the most influential Christian book of the nineteenth century". It became a best-selling American novel, surpassing Harriet Beecher Stowe's Uncle Tom's Cabin (1852) in sales. The book also inspired other novels with biblical settings and was adapted for the stage and motion picture productions. Ben-Hur remained at the top of the US all-time bestseller list until the publication of Margaret Mitchell's Gone with the Wind in 1936 (Wikipedia). There were some issues surrounding the original binding. Apparently Mrs. Wallace objected to its floral decorative cloth. The first edition was issued in a series which the Harpers were then publishing. It was bound in cadet-blue cloth, and decorated with clusters of flowers in red, blue, and green on the front cover and a vase of flowers in the same colors on the back cover. Harpers apparently retaliated at Susan Wallace's objections over the binding. In the next two binding states (all first editions), the text was bound in drab, brown mesh cloth over beveled boards [Binding State 2] and brown pebbled cloth over beveled boards [Binding State 3]. (Wikipedia) This copy is an octavo in a later binding of dark blue cloth with gilt titling and a striking gilt star on the front cover. Wear and fraying to spine ends, corners, and edges of boards. Bump / chip to edge of front board. Minor rubbing and soiling to boards. Interior pages show some aging but clean overall. On one page a quote is bracketed in pen with an asterisk. Previous owner's signature in pencil to front free endpaper. Some pulling to signatures but text block is tight. In very good condition. 560 pages plus 16 pages of advertisements. LIT/041919. (Inventory #: 33229)
$75.00 add to cart or Buy Direct from
Kelmscott Bookshop
Share this item

The Dramatic Works of William Shakspeare [Shakespeare], Accurately Printed from the Text of the Corrected Copy Left by the Late George Steevens, Esq. with a Glossary, and Notes, and a Sketch of the Life of Shakespeare. Two Volumes

Hartsford, CT : Andrus and Judd , 1836
(click for more details about The Dramatic Works of William Shakspeare [Shakespeare], Accurately Printed from the Text of the Corrected Copy Left by the Late George Steevens, Esq. with a Glossary, and Notes, and a Sketch of the Life of Shakespeare. Two Volumes)
View all from this seller>