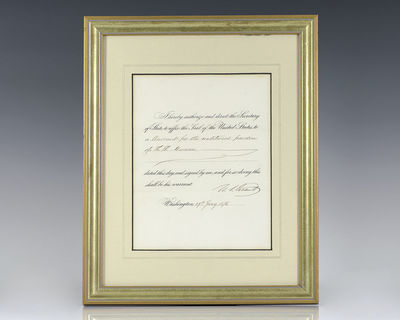 by Grant, Ulysses S
1876. Document signed Ulysses S. Grant as President of the United States of America, one page, January 29, 1876. President Grant authorizes and directs "the Secretary of State to affix the Seal of the United States to a Warrant for the conditional pardon of H.H. Mareau." Signed boldly at the conclusion by Grant. Accompanied by a small folder of papers generated from the National Archives which provide information on the pardon of H.H. Mareau whose offense was "issuing business cards in likeness of Treasury notes." Matted and framed. Ulysses S. Grant was the 18th President of the United States (1869-77). As Commanding General of the United States Army (1864-69), Grant worked closely with President Abraham Lincoln to lead the Union Army to victory over the Confederacy in the Civil War. He implemented Congressional Reconstruction, often at odds with Lincoln's successor, Andrew Johnson. Twice elected president, Grant led the Republicans in their effort to remove the vestiges of Confederate nationalism and slavery, protect African-American citizenship, and supported unbridled nationwide industrial expansionism during the Gilded Age. (Inventory #: 99122)
$1750.00 add to cart or Buy Direct from
Raptis Rare Books
Share this item