A Farewell To Arms. 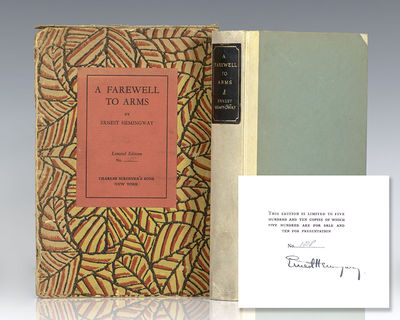 by Hemingway, Ernest
New York: Charles Scribner's Sons, 1929. Signed limited first edition of this early Hemingway classic, which established him among the American masters. Tall octavo, original white parchment over green boards. One of 510 copies signed by Ernest Hemingway, this is number 128. Near fine in the rare original slipcase which is in very good condition, lacking the small bottom panel. A nice example. Written when Ernest Hemingway was thirty years old and lauded as the best American novel to emerge from World War I, A Farewell to Arms is the unforgettable story of an American ambulance driver on the Italian front and his passion for a beautiful English nurse. Set against the looming horrors of the battlefield—weary, demoralized men marching in the rain during the German attack on Caporetto; the profound struggle between loyalty and desertion—this gripping, semiautobiographical work captures the harsh realities of war and the pain of lovers caught in its inexorable sweep. Ernest Hemingway famously said that he rewrote the ending to A Farewell to Arms thirty-nine times to get the words right. Farewell To Arms is the only signed limited edition of Ernest Hemingway's works. (Inventory #: 95264)
$8800.00 add to cart or Buy Direct from
Raptis Rare Books
Share this item