Hierosolyma Urbs Sancta, Iudeae, Totiusque Orientis Longe Clarissima, Qua Amplitudine ac Magnificentia hoc Nostro Aevo Conspicua Est. [Map of Jerusalem: Holy City of Jerusalem, by far the most famous city of Judah and the entire Orient which in its dimensions and magnificence is conspicuous in this age of ours] 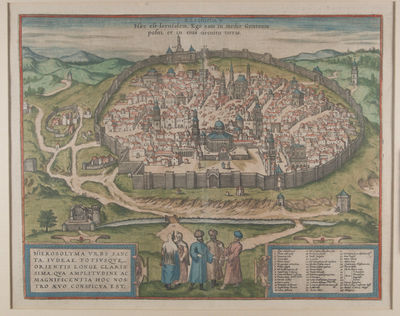 Köln: Peter von Brachel, 1575. First edition. 16.25 x 13 inches. Handcolored copperplate view of Jerusalem from the first atlas of world cities, Civitates Orbis Terrarum (volume II, page 54) with plates primarily by Flemish engraver Frans Hogenberg. In addition to engraving the majority of the plates in the six-volume atlas, Hogenberg directed the work of about 100 other engravers; The David Rumsey Map Collection sites Simon Novellanus and Joris Hoefnagel as the engravers of this decorative Jerusalem view. Two pages of text about the city by Georg Braun in Latin on verso. Title cartouche in Latin. Five figures (two women and three men) in local dress, foreground. The Torrens Cedron (Brook of Kidron) with bridge runs in front of the city wall. Viewed from the east (from the Mount of Olives), the plan's key locates 48 Jewish, Christian and Islamic sites. Top verse from Ezekiel, who in the Bible is bidden by God to outline a plan of Jerusalem (Hierosolyma): "This is Jerusalem! I have set it in the midst of the nations and countries that are round about her." The coloring on this particular copy is especially well designed in relation to the graphic elements. In a long lineage of graphic depictions of the city that include Medieval manuscripts, the sixth-century Madaba floor mosaic and towns carved in stone in ancient Assyria and Egypt, the empires that straddled Palestine. Matted and framed (24.75 x 20.5 inches). Civitates Orbis Terrarum (1572-1617) was designed as a companion to Abraham Ortelius' 1570 Theatrum Orbis Terrarum (the first true atlas of world maps) on which Hogenberg also served as the primary engraver. Peter von Brachel's Civitates Orbis Terrarum was supported with information from Ortelius. (Inventory #: 45139)
$1500.00 add to cart or Buy Direct from
Eric Chaim Kline Bookseller
Share this item