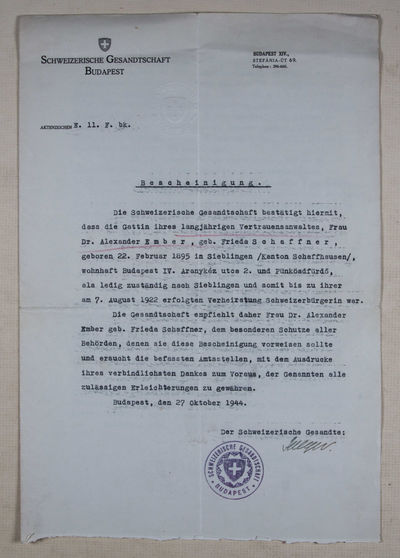 by n/a
Budapest: Schweizerische Gesandschaft Budapest, 1944. Loose leaf. Fine condition. Signed "Jaeger" by Swiss Ambassador Maximilian Jaeger. Folio (12 x 8 14"). 4pp. Original typed and signed document on official embassy stationary in modern blue portfolio folder. BUDAPEST XIV., STEFÁNIA-ÚT 69. Telephon: 296-660. File No. E. 11. F. bk. C e r t i f i c a t e The Swiss Embassy herewith confirms, that the wife of your longtime confidential lawyer, Mrs. Dr. Alexander Ember, nee Frieda Schaffner, born on February 22, 1895 in Sieblingen / Canton Schaffhausen /, residing in Budapest IV. Aranykéz utca 2. and Pünkösdfürdö, while single lived in Sieblingen and therefore was a Swiss citizen until her marriage on August 7th, 1922. The Embassy therefore recommends that Mrs. Dr. Alexander Ember, nee Frieda Schaffner, receive the special protection of all government agencies, who she might present this certificate to, and petitions these relevant agencies, in advance with the expression of her obliging thanks, to grant the named all admissible alleviation. Budapest, October 27th, 1944 The Swiss Ambassador: Signed: Jeager With official Embassy stamp. The verso of the first page of the certificate is blank. Page 3 contains the same text in French and Hungarian, including signature of the ambassador and official embassy stamp underneath both texts, verso blank. (Inventory #: 44942)
$2750.00 add to cart or Buy Direct from
Eric Chaim Kline Bookseller
Share this item