The Letters. Newly re-edited, revised and corrected, including over three hundred letters not previously translated into English. Introduction by A. Edward Newton. [8 volumes]. 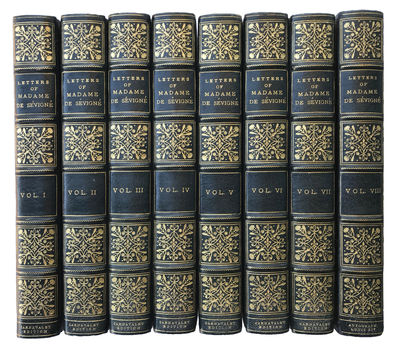 by SEVIGNE, Madame de [Marie de Rabutin-Chantal, marquise de Sevigne] (1626-1696).
Philadelphia:: J.P. Horn, 1927., 1927. SPECIALLY BOUND SET. 8 volumes. Royal 8vo. 7 colored frontispieces Original full blue morocco, covers richly gilt in floral boarders with gilt heraldic center device, spine similarly gilt, gilt ruled inner dentelles, red leather doublures enclosed in gilt ruled border, red silk moire endleaves. THE EIGHTH VOLUME CONTAINS AN ORIGINAL VELLUM MANUSCRIPT DOCUMENT SIGNED BY KING LOUIS XIV (1638-1715). The set bound by Stikeman in contemporary full blue morocco. Minor rubbing, a few marginal tears to preliminaries of volume one, the eighth volume rebuilt to correct a binding flaw, but preserved beautifully. WITH AN ORIGINAL VELLUM DOCUMENT SIGNED BY LOUIS XIV, KING OF FRANCE / IN A DELUXE VERSION OF THE LETTERS OF MADAME DE SEVIGNE – COPY #3 CARNAVALET EDITION, expanded with an eighth "volume." "Newly re-edited, revised and corrected, including over three hundred letters not previously translated into English. WITH SPECIAL ADDED COLOPHON LEAF TO THE SUBSCRIBER, Mrs. J. P. Laffey [John Paul Laffey]: "The additional volumes contains an original vellum document signed by Louis XIV, Set Number 3. THIS IS CLEARLY ONE OF THE MOST DELUXE FORMS OF THIS SET. Normally seen bound in cloth, even another deluxe copy was also bound by Stikeman, but with the usual seven volumes. The unusual eighth volume here is extra and may be unique, at least to the extent that this is copy #3 (copies #1 and 2, if extant, might include other document). / The letters within this volume are mostly addressed to Madame de Grignan (her daughter, Francoise-Marguerite de Sevigne, comtesse de Grignan). / The letters of Madame de Sevigne, a French aristocrat, are much admired for their wit and vividness. A voracious writer, most of her letters were written to her daughter Francoise-Marguerite de Sevigne (1646-1705). On 4 February 1671, Madame de Grignan left Paris to join her husband in Provence (the baby girl being shipped off to a convent for life.) The separation from Francoise-Marguerite left Madame de Sevigne bereft. "I look in vain for my daughter; I no longer see her, and every step she takes increases the distance between us. (I am) still weeping, still swooning with grief," she wrote to Francoise-Marguerite only hours after her departure. Thus began perhaps the most famous series of correspondence in literary history. Over the span of nearly 30 years, Madame de Sevigne sent well over 1,000 letters to her daughter in the far-away Chateau de Grignan, often composing them at the rate of 20 pages a day. / LOUIS XIV (1638-1715), dated 26 August 1665 official document on vellum, folded. [15.5 x 21 inches]. This document opens, as per usual, " Louis par La grâce de dieu – Roy de France et de Navarre Chef et Souverain Grand Maistre de l'Ordre et Milice du Saint-Esprit, a tous ceux qui ces presentes lettres verront; Salut..." Signed by Jeannin De Castille. By my read (and others could do much better than I!) the text of the document names Baron [Jean-Baptiste] Colbert (1619-1683), who was a French politician who served as the Minister of Finances of France from 1661 to 1683 under the rule of King Louis XIV. At this time in his life, 1665, "Colbert had worked to create a favourable balance of trade and increase France's colonial holdings. Colbert worked to develop the domestic economy by raising tariffs and by encouraging major public works projects, and to ensure that the French East India Company had access to foreign markets, so that they could always obtain coffee, cotton, dyewoods, fur, pepper and sugar. In addition, Colbert founded the French merchant marine. Colbert's market reforms included the foundation of the Manufacture royale de glaces de miroirs in 1665 to supplant the importation of Venetian glass. In January 1664 Colbert became the Superintendent of buildings; in 1665 he became Controller-General of Finances. A hard worker his whole life, he died of kidney stones, suffering greatly in pain due to them." PROVENANCE: John Paul Laffey (1862-1937), a judge, married Marie Louise Soutiere Laffey (1869-1934), the owner, of Delaware. As a lawyer Laffey was head of du Pont's legal department. His obituary appears in the South Dakota Bar Journal, Volume 6, 2917. (Inventory #: LV2649)
$4000.00 add to cart Available from
Jeff Weber Rare Books
Share this item

London: : John Reeves, 1802. , 1802
(click for more details about The Holy Bible, containing the Old Testament and the New: translated out of the original tongues, and with the former translations diligently compared and revised, By His Majesty's special Command. [Five volumes].)

[New York]: : Physical Review Letters, 1964. , 1964
(click for more details about [3 offprints, including:] Spin and Unitary-Spin Independence in a Paraquark Model of Baryons and Mesons.)
View all from this seller>