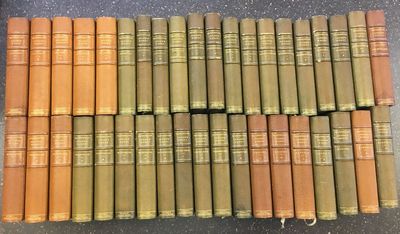 by Irving, Washington
New York: G.P. Putnam's Sons, 1895. The Author's Autograph Edition, #202/500. Hardcover. Octavos, 40 volumes; VG; uniformly bound in the publisher's original three quarters green morocco, marbled boards, paneled spines with gilt text and tooling, top edges gilt; marbled endpapers; 13 volumes with sunned spines; very mild wear to bindings; One of 500 sets, this is number 202, all volumes with limitation pages; this set contains page 209 of original manuscript of The Alhambra tipped in to volume one of The Alhambra, with several edits by Irving in ink.; shelved above HC Fiction. Washington Irving (1783-1859) was an American short story writer, essayist, biographer, historian, and diplomat of the early 19th century. He is best known for his short stories "Rip Van Winkle" (1819) and "The Legend of Sleepy Hollow" (1820), both of which appear in his collection The Sketch Book of Geoffrey Crayon, Gent. His historical works include biographies of Oliver Goldsmith, Islamic prophet Muhammad, and George Washington, as well as several histories of 15th century Spain that deal with subjects such as Alhambra, Christopher Columbus, and the Moors. Irving was one of the first American writers to earn acclaim in Europe, and he encouraged other American authors such as Nathaniel Hawthorne, Henry Wadsworth Longfellow, Herman Melville, and Edgar Allan Poe. He was also admired by some British writers, including Lord Byron, Thomas Campbell, Charles Dickens, Francis Jeffrey, and Walter Scott. He advocated for writing as a legitimate profession and argued for stronger laws to protect American writers from copyright infringement. [wikipedia]. Shelved Dupont Bookstore. (Inventory #: 9-442-1316554)
$3200.00 add to cart or Buy Direct from
Second Story Books
Share this item

DRAKULYA: BEING AN ACCOUNT OF THE LIFE OF DRAKULYA, PRINCE OF WALLACHIA, AND THE BLOODY DEEDS THAT SHAPED THE LEGEND [SIGNED]

Sussex, England : Post Mortem Books , 1997
(click for more details about DRAKULYA: BEING AN ACCOUNT OF THE LIFE OF DRAKULYA, PRINCE OF WALLACHIA, AND THE BLOODY DEEDS THAT SHAPED THE LEGEND [SIGNED])

THE HISPANIC WORLD 1492-1898: A GUIDE TO PHOTOREPRODUCED MANUSCRIPTS FROM SPAIN IN THE COLLECTIONS OF THE UNITED STATES, GUAM, AND PUERTO RICO

Washington, D.C. : Library of Congress , 1997
(click for more details about THE HISPANIC WORLD 1492-1898: A GUIDE TO PHOTOREPRODUCED MANUSCRIPTS FROM SPAIN IN THE COLLECTIONS OF THE UNITED STATES, GUAM, AND PUERTO RICO)
View all from this seller>