Analysis of theology, law, religion, and the rights of man 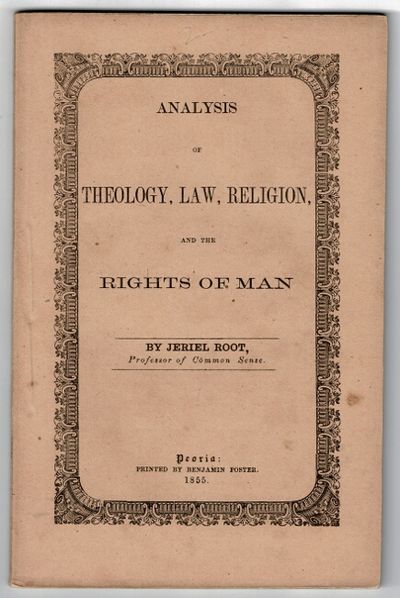 by Root, Jeriel, Professor of Common Sense
Peoria: printed by Benjamin Foster, 1855. First edition, 8vo, pp. iv, [5]-72; some foxing on the early leaves, else fine in original printed salmon wrappers. "Root was a former common-school teacher who moved to Peoria County from Ohio in the fall of 1830. He apparently became a farmer after moving to Illinois" (Byrd). An eccentric populist attack against big banks and the American legal system from an aging Peoria county farmer who notes that for "more than fifty years I have seen that there was some thing radically wrong in the political and religious world ... I exerted myself for more than half a century, politically and religiously, for the sole purpose of heading and stopping those evils, but all to no effect. The public journals, both religious and political, would not publish my communications, because they were Truth." He was apparently a member of the National Reform Association, an organization bent on (re-)Christianizing American society. He puts forth a libertarian philosophy, saying that the greatest evils are: first and foremost, Land Monopoly; Chattel Slavery; Alcohol; and, Monopoly of the Law. Byrd 2346; Graff 3563; Sabin 73131; 4 in OCLC: AAS, Newberry, Illinois, and the Lincoln Presidential Library. (Inventory #: 53636)
$345.00 add to cart or Buy Direct from
Rulon-Miller Books
Share this item