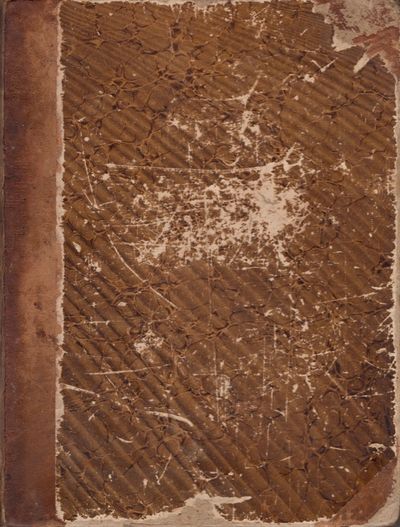 by [Unknown]
Boston and Lynn, Massachusetts, 1864. Ledger. Good. Quarto. Ledger. [79] leaves used for newspaper scrapbook and ledger accounts from Boston and Lynn, Massachusetts 1859-1864. The ledger book has marbled paper covered boards. Ledger repaired with paper spine and tissue repaired hinges. Stating to some pages from the glue used for the scrapbook portion. Approximately half of the ledger was used for scrapbook purposes. The first 35 leaves are filled with newspaper clippings articles and stories pasted down on the ledger accounts. Clippings include "an hour in an old curiosity shop in Lynn; old coins; an autumn trip to New York City; "The Wampum Makers Home"; etc. The ledger accounts start in Boston in 1859 and later accounts are from Lynn in 1864. Items listed in the ledger mostly refer to "lins","linings", "stiffs", cotton, twine, etc. A label pasted down on the front paste down reads, "Sold by Benjamin Loring & Company, Importers of and Dealers in Charts, Navigation Books, Stationary, &c., 120-122 State Street, Boston." Written on the rear paste down is "J P Russell 100 2lb Bags". Lynn Massachusetts was a big textile and cotton mill town in the latter nineteenth century. (Inventory #: 16461)
$125.00 add to cart or Buy Direct from Americana Books
Share this item

The History Of English Law, Before The Time Of Edward l. 2 Volumes

Birmingham, AL : Legal Classics Library , 1982
(click for more details about The History Of English Law, Before The Time Of Edward l. 2 Volumes)

New York : Legal Classics Library , 1992
(click for more details about The Supreme Court in United States History. 2 Volumes)
View all from this seller>