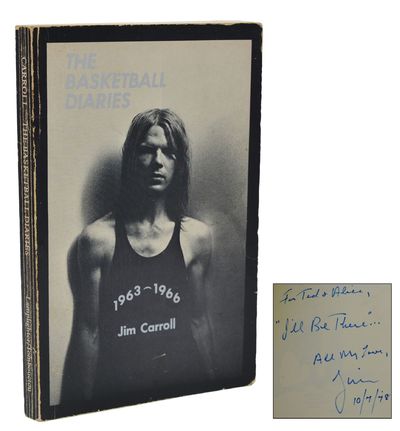 by Carroll, Jim; [Berrigan, Ted; Notley, Alice]
Bolinas, CA: Tombouctou, 1978. First Edition. Very Good. First edition, first printing. A fantastic association copy, signed by Jim Carrol, inscribed to poets Ted Berrigan and his wife Alice Notley on the half-title page, "To Ted + Alice, 'I'll be right there'... All my love, Jim 10/7/78." Berrigan was a central figure in the second generation of the New York School of Poets. While teaching at St. Mark's Poetry Project in the Bowery, Berrigan took a very young Carroll under his wing, introducing him to figures such as William S. Burroughs and Jack Kerouac. A blurb on the rear cover supplied by Kerouac reads, "At 13 years of age, Jim Carroll writes better than 89% of the novelists working today." Berrigan made his admiration of Carroll known, dedicating several of his poems to him, and publishing an article entitled "Jim Carroll" in a 1969 issue the journal Culture Hero, heaping high praise, exclaiming "Jim Carroll has to be the biggest thing arriving in heroic culture right now." Bound in publisher's wraps with black and white author photo on the front cover taken by Rosemary Klemfuss. Very Good with spine lean, creases to spine and covers, stain to textblock edge occasionally affecting margins, light scuffs to half-title page, several page corners creased. The fictionalized memoir of juvenile delinquency and heroin abuse that inspired the 1995 film starring Leonardo DiCaprio. Carroll's best-known work, inscribed to his mentor and major figure in New York poetry, in the year of publication. (Inventory #: 140938225)
$5,500.00 add to cart Available from
Burnside Rare Books
Share this item
Burnside Rare Books
Offered by

The Teachings of Don Juan

Berkeley : University of California Press , 1968
(click for more details about The Teachings of Don Juan)

Bolinas, CA : Tombouctou / A Lamplighter Book , 1978
(click for more details about The Basketball Diaries)
View all from this seller>