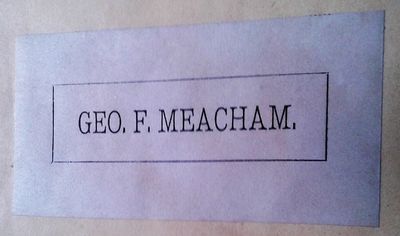 by Sloan, Samuel
Sloan, Samuel. SLOAN'S HOMESTEAD ARCHITECTURE, CONTAINING Forty Designs for Villas, Cottages, and Farm Houses, with Essays on Style, Construction, Landscape Gardening, Furniture, etc. etc. Illustrated with Upwards of 200 Engravings. By Samuel Sloan, Architect, Author of the "Model Architect," "City and Suburban Architecture," "Constructive Architecture," etc.
Philadelphia: J. B. Lippincott & Co., 1861. First edition. 23 cm. [xii; 13 – 355 pages; i] 16mo. Embossed brown cloth, now faded, with gilt decorations on the spine. Yellow endpapers. A double-association copy: the book plate of the celebrated Boston architect, George F. Meacham, is present on the front fly-leaf, as is the signature of historical novelist Esther Forbes Hoskins both a Pulitzer Prize winner and a Newbery Medal winner. Ms. Forbes' researcher, her mother, Harriette M. Forbes, also signed the front fly-leaf in pencil. Signatures 8 and 9 are loose and holding by only one stitch. Otherwise, this is a bright and tight copy, exceptions noted.
George Frederick Meacham (1831 - 1917) was an architect in Boston, Massachusetts, a name partner in the firm of Woodcock & Meacham. He designed Boston's Public Garden, the Massachusetts Bicycle Club; and churches, homes, and monuments in greater Boston and elsewhere in New England. Meacham graduated from Harvard College in 1853.
'Esther Louise Forbes (1891 – 1967) was an American novelist, historian and children's writer who received the Pulitzer Prize and the Newbery Medal. She served on the editorial board of the Wisconsin Literary Magazine, with another future Pulitzer Prizewinner, Majorie Kinnan Rawlings. In 1919, Forbes returned to Worcester and worked in the editorial department of Houghton Miflin in Boston. From 1924 to 1926 Forbes wrote for the "Boston Evening Transcript." She married Albert L. Hoskins, Jr., an attorney, on January 14, 1926, and left Houghton Mifflin. The couple moved to New York City. Her first novel, "O Genteel Lady!" was published in 1926 and was selected as the second book for the Book of the Month Club. In 1928 "A Mirror for Witches" was published. In 1933 she and Albert Hoskins divorced. Although she retained her married name, she wrote under her maiden name, Esther Forbes. Forbes returned to Worcester in 1933, where she lived with her mother, Harriette M. Forbes, who then began working closely with Forbes on the research for her novels, often at the local research library, the American Antiquarian Society. In 1935 "Miss Marvel." in 1937 "Paradise" and in 1938 "The General's Lady" were published. These were historical novels set in New England from colonial times through the early years of the Republic. Forbes wrote a definitive biography of Paul Revere, "Paul Revere and the World He Lived In" (1942), for which she received the 1943 Pulitzer Prize for History. And, in 1943 she received an honorary Doctor of Letters degree from Clark University. In 1943, her best-known work "Johnny Tremain" was published, for which she received the Newbery Medal in 1944. In 1946 "America's Paul Revere" was published and in 1947 "The Boston Book" was published. In 1947, she received the novel award from MGM of $150,000 for "The Running of the Tide", published in 1948. In 1949 she was elected a Fellow of the American Academy of Arts and Sciences. "Rainbow on the Road" was published in 1954. In 1960 Forbes became the first woman elected to membership in the American Antiquarian Society.' See: Newbery Medal and Honor Books. (Inventory #: 252)
$1000.00 add to cart Available from
Gosen Rare Books
Share this item

The Oxford Almanack for the Year of Our Lord God MDCCXXI.

Oxford : M. Burghers , 1720
(click for more details about The Oxford Almanack for the Year of Our Lord God MDCCXXI.)